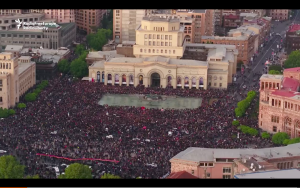 Armenians continued to fill the capital city of Yerevan’s main square by the tens of thousands to protest former President Serzh Sarkisian being named as new prime minister. Sarkisian served ten years in the presidential office and citizens view his remaining in power as complete corruption.

“Opposition lawmaker Nikol Pashinian was detained during a demonstration in central Yerevan on April 22 after failed talks with Sarkisian, who walked out after the protest leader said the only thing to discuss was his resignation. ​Pashinian was confronted by masked police officers and other security personnel as he led a crowd of several hundred supporters marching to the city’s southern Erebuni district. The police fired stun grenades to stop the march,” reported RFERL.

Today in #Yerevan. Hundreds of thousands protests against the government. #ArmeniaProtest ?? pic.twitter.com/9ldfWBxIyE