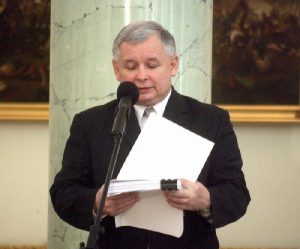 Poland’s ruling party leader, Jaroslaw Kaczynski, the man who many say holds the real power in the Eastern European country, blamed Germany’s Angela Merkel for the migration problem into the Continent from the Middle East and Africa which has radically altered European culture forever and may cause the breakup of the European Union.

“We have not opened Europe for refugees — Ms Merkel has. And it is Ms Merkel and Germany that have to bear the consequences, not Poland,” Kaczynski said in an interview for public broadcaster TVP Info, reported Reuters.

The European Union Parliament has condemned Poland and Hungary for not accepting refugees and is threatening financial sanctions if their stance on the issue does not change. The EU wants each country to admit hundreds of thousands of migrants; they are refusing to do so.

The ‘refugees’ are currently stuck in Italy and Greece and the EU sees Eastern Europe as a safety valve for the demographic pressure to relieve these governments. Some have fled fighting in the Middle East but most are ‘economic’ migrants.