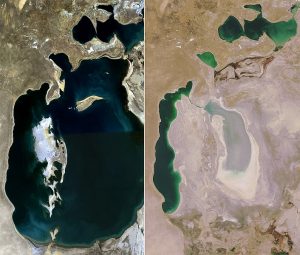 Vozrozhdeniya was once home to a vibrant fishing village fringed by turquoise lagoons, back when the Aral Sea was the fourth-largest in the world and abundant with fish.

But after years of abuse by the Soviets, the waters have receded and the sea has turned to dust; the rivers that fed it were diverted to irrigate cotton fields. Today, a layer of salty sand, riddled with carcinogenic pesticides, is all that remains of the ancient oasis.

Now Vozrozhdeniya has swallowed up so much of the sea that it’s swelled to 10 times its original size, and is connected to the mainland by a peninsula. But it is thanks to another Soviet project that it is one of the deadliest places on the planet…