Jaroslaw Kaczynski, head of the Law and Justice Party and the de-facto leader of the nation of Poland, who rules behind the scenes, today praised the Jewish State of Israel and denounced anti-semitism, as he honored Poles who hid Jews from the Nazis during World War II. Kaczynski “spoke at an outdoor ceremony attended by Israeli, U.S. and British officials and organized by From the Depths, a foundation established by descendants of Jewish Holocaust survivors.,” reported Associated Press.

The party leader said Israel owes its existence to the “power of spirit, power of the mind, determination and courage” of its people. He denounced anti-Semitism as a “very dangerous” phenomenon that is expressed through hostility toward the country.

“In its way, in a real way, Israel is a great state, [an] “outpost of our civilization.”

From the Depths presented the Zabinski Awards, named for former Warsaw zoo director Jan Zabinski and his wife, Antonina, who hid over 300 Jews at the zoo during World War II. Franciscan nuns who sheltered hundreds of Jews were also honored. 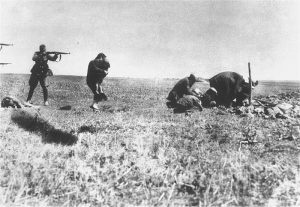 Eastern European countries have been battling the globalist agenda of the European Union as the bloc attempts to force them to take hundreds of thousands of migrants that will destroy their culture and security, as we have seen in the United Kingdom, Sweden, Germany, France, Belgium, etc. The EU has also accused Eastern Europe of anti-semitism as the Visegrad Group has actively attempted to stop the destructive agenda of billionaire financier George Soros who through multiple NGOs is pushing an open-borders agenda. Soros admitted years ago of collaborating with the Nazis during the war against fellow Jews. Below is the 60 Minutes video where he admits this collaboration.