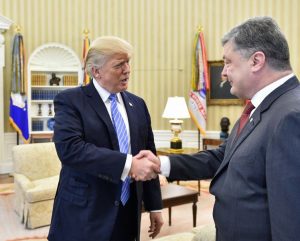 Ukrainian President Petroshenko went to Washington this month to meet with President Donald Trump in the Oval Office and it seems the former candy maker came away with some goodies. Two defense deals were signed but the details remain unclear. The main result seems to be that the Ukrainian military will get access to more defensive equipment needed to fight the Russian-supplied insurgency.

Kyiv’s goal was to not just secure access to additional equipment such as radars and defense equipment, but to join forces with the United States in research and development to provide new technologies and tactics to counter pro-Russian separatists in East Ukraine.

Denys Gurak, deputy head of foreign economic activity at Ukroboronprom, a conglomerate of Ukrainian defence companies, said the two agreements to be signed will provide Ukraine with equipment ranging from radar systems, drones and secure communications, reported Reuters. Ukraine will also be able to sell its defense products into the U.S. markets.