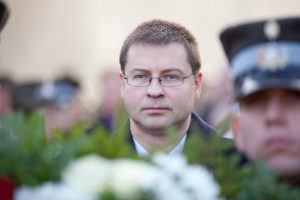 “We should be ready to defend longstanding European values when they are threatened or when evidence-based policy is assaulted by alternative facts,” he said in a speech at a London event hosted by Bloomberg, reports The Baltic Times. His primary focus was financial. “Last June’s referendum result — which we regret but respect — means we are now preparing for a new EU-UK relationship. The recent American elections have caused further uncertainty, and shaken many well-established assumptions.

“America has every right to change its approach, to redefine its national interest…Europe is entitled to gently suggest international cooperation on financial governance is in everyone’s interest.

“What would happen if financial sector rules in New York, Hong Kong, London, Paris, Frankfurt or Singapore were very different?”

He added: “The EU will uphold the reforms introduced to protect financial stability in Europe. And we will be ready to take the necessary measures to protect and strengthen these achievements.”

Dombrovskis seemed to take a dismissive tone towards Brexit and the Trump administration. He conveniently left out the millions of Europeans who have had their lives negatively impacted through uncontrolled migration. He also did not address the fact that Europe has lived off American protection for decades while allowing their defense capabilities to atrophy. The Trump administration seems to think the trillions America has spent so Europe can live comfortably seems to be very ‘financial.’