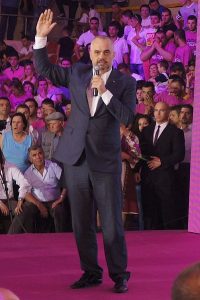 The new Albanian government is being formed. Prime minister Rama has set as a main objective for Rama 2.0, administrative reforms, and minimizing the number of portfolios.

Rama 1.0 had 19 ministries altogether. The new government is expected to hold only 10-12 portfolios.
The expert group, set up to handle administrative and structural reforms, sees the current number of ministries as too large, compared to the population in Albania. They are taking in consideration the political distribution of portfolios and the need for a more efficient administration, in order to limit bureaucracy and abusive actions.

The main reason why previous Albanian governments were more numerous was coalitions, i.e. satisfying allys by increasing unnecessarily the number of portfolios. However, the problem is not as simple as it seems.

Previously, problems arising among ministries were never resolved in time, as each of them tried to push the burden to the other, due to a non-distinct legal framework.

Now ministries that are at risk of shrinking or being restructured are: Ministry of Culture, that is supposed to merge with Ministry of Education; Environment with Agriculture; Urban Development with Ministry of Labour; Economy with Finance, and Ministry of Innovation with that of Internal Affairs.

The most debatable issue is whether the Ministry of Integration will join that of Foreign Affairs. It seems most likely that they will stay separate, due to their specific functions.

The deadline for the new government is by the end of August. Prime minister Rama seems determined to perform better with his Rama 2.0 government, as now he is leading the country single-handedly.
He has undertaken a tour of the main cities of Albania, calling it the “People’s hearing”, where he sits among crowds of people interested in giving their opinions on a better government that will lead the country for the next four coming years.