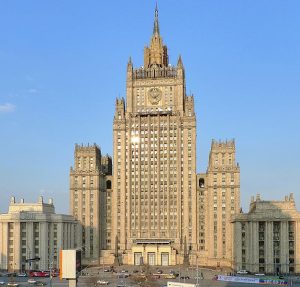 The Founding Fathers set up a system of checks and balances. That’s something we all learned about this in civics class (unless you are a millennial who didn’t take civics). So, it is well within the authority of the legislative branch to attempt to tie the president’s hands when it comes to sanctions on Russia.

That, however, does not mean it is wise to do so.

Congress and the judiciary have been especially active in attempting to rein in President Trump. The official narrative is that this is due to Russian interference in our elections, even though this has not been proven, at least publicly. The other narrative used to justify action is the completely unproven charge that Mr. Trump’s campaign colluded with Russia to defeat Democratic nominee Hillary Clinton in 2016.

The conservative establishment on the right, in alliance with the rabidly anti-Trump left, desperately wants to remove this president from power. I think the declared reason — Russia — is a complete red herring. The real reason is that those in the depths of the Washington Swamp want to keep their power and the money that goes along with it. They want to prevent Mr. Trump’s agenda from being implemented.
So where does the sanctions law leave the administration when it comes to dealing the Kremlin? For one, it needlessly codifies into law sanctions that will be difficult to remove in the long term. The penalties may be there for a long time. This will be a continual cloud hanging over the bilateral relationship.

But the bigger problem is that Mr. Trump now will have a much harder time finding solutions to global security problems, as he will not be able to negotiate in good faith. What if Russian President Putin wants to make a deal in return for sanctions relief? The Russian economy is hurting and this is the main pressure point for the Kremlin at the moment.

What if Mr. Putin wants to settle the conflict in eastern Ukraine? What if he offers a deal on Ukraine in return for securing Russian access to Western investment dollars? What if he offered real assistance in defeating the Islamic State?

It’s not just in Europe and the Middle East where the U.S. could use some assistance from Moscow. The press focused on China when we talk about the North Korean crisis. Yes, China has influence on North Korean leader Kim Jong-un, but it seems to be less than Mr. Trump thought.

Chinese President Xi Jinping’s recent comments were right. North Korea did not come from China. It emerged from the Soviet Union. It came from Stalin. North Korea is a microcosm of what Russia looked like under Stalin. To this day, Russia maintains huge influence with the North Koreans. Moscow is training North Korean students across Siberia on topics such as transportation and infrastructure. Russia is helping to modernize rail lines into the North in order to increase trade. Russia is providing fuel, coal and other raw materials to Pyongyang.

As China reduced imports from the North due to Mr. Trump’s outreach to Mr. Xi, Russia picked up the slack. Trade has increased dramatically between Russia and North Korea in the first few months of this year.
America needs help to prevent a war with North Korea, and Russia can provide that help.
But Russia won’t do so after this sanctions law, at least not for a long time.

Yes, the Russians needs to be confronted when they are aggressive. Russia needs to be made very aware of America’s red lines in Europe, the Middle East and elsewhere. Mr. Trump, not former President Barack Obama, was the one who launched 60 cruise missiles at a Syrian base where a few hundred Russian technicians were present. Congress had no problem with Mr. Obama selling out American security to the Iranians. The selective outrage here is palpable.

Tying the president’s hand is not smart. On the contrary, it can be dangerous.

Russia Says Not Planning Conflict With US