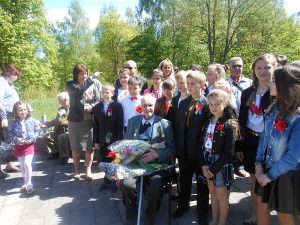 Ukrainian President Petro Poroshenko said today the country will move its Victory Day celebration one day earlier to May 8th instead of the 9th when celebrated by the Russian Federation. Russia historically has marked the end of the war a day later than Europe over feelings it was not sufficiently recognized for its efforts against the Nazi regime. With Ukraine at war with Russian-supported rebels in East Ukraine, many Ukrainians feel celebrating the Red Army with Russia is an affront to those who have died fighting Moscow’s presence in Donbass.

“We will no longer celebrate this holiday along the Russian scenario,” Ukrainian President Petro Poroshenko told a group of soldiers, reported AFP.

Several thousand participated in the Immortal Regiment in Kyiv to mark the occasion but clashed with nationalist demonstrators upset the marchers were remembering the Red Army’s efforts. Fifty people were arrested during the melee, reported Associated Press.

As the march passed the headquarters of the Organization of Ukrainian Nationalists, smoke bombs, eggs and potatoes were thrown at the marchers from inside the building. Police said they arrested 24 people in the nationalists’ building. Other clashes were reported in Odessa, Kharkov and Zaporizhia, again reported AP.

“This march is being staged in Kiev so that it can be shown on Kremlin TV,” right-wing protester Oleksandra Podkopayeva told AFP

In the Eastern rebel areas, pro-Russian separatists rolled out tanks to parade that were banned by the 2015 Minsk agreements. 10,000 people participated in the Immortal Regiment in Donetsk, reported AFP. 45 pieces of heavy military armor along with other crew-served weapons were seen.

“I want to see the day when, at the end of our own war, we also get a chance to celebrate Victory Day,” the 20-year-old rebel student told AFP.

“Our war is almost as long as the Great Patriotic War. It is time to finish it already.”

Deadlines For Greece/Bulgarian Pipeline Extended By A Month

Russia Moves To Sue Ukraine In British Court Over Default