“We are the workers of Ahvaz steel. We will fight against tyranny,” the workers were chanting.

The workers of Iran National Steel Industrial Group in Ahvaz gathered for the 15th day of their strikes and protest On Saturday, Nov 23, 2018, demanding their unpaid salaries.

The workers began their demonstration in front of the Khuzestan governorate. The workers were chanting, “Shame on a government that deceives the people.” During their march, the protesters stopped in front of the Bank-e Meli (National Bank) for another round of slogans and speeches, in which they addressing the government, saying, “Congratulations on your bondage with the mafia,” a reference to the widespread government corruption that is taking its toll on the livelihoods of the workers and their families.

In the meantime according to reports, frustration with water shortages in Iran’s central city Esfahan is growing, with farmers seen wearing white vest symbolizing the grave shrouds, a sign that they will be standing for their rights to the ultimate cost.

The farmers of Khourasgan, Isfahan, gathered in front of the city’s fruits and vegetable market and staged a demonstration on Nov. 22, 2018. This the 65th day of the protests of the farmers, who have risen because of lack of access to water and the mismanagement of water sources by the government. The farmers of West Isfahan, from Koushk and Goldasht and Jozdan, suburbs of Najafabad, also demonstrated for their rights.

In the past 40 years, corrupt and destructive policies by the Iranian regime has cut off farmers’ access to vital water sources to irrigate their lands. Iran’s economy is dominated by companies that are owned by the Revolutionary Guard Corps (IRGC). Recklessly, these companies began damming major rivers, changing the historical water flows of Iran. This was done to give water preferences to powerful landowners and favored ethnic communities while also transferring billions from the public treasury to IRGC leaders’ accounts. In all, since the 1979 revolution, more than 600 dam projects have been completed, contrasted with 13 dams built in Iran prior to the shah’s fall. 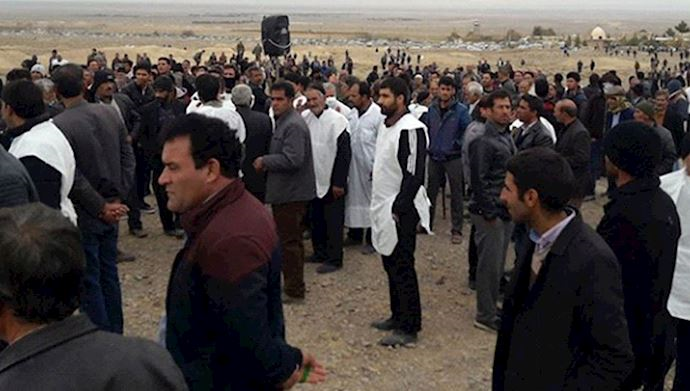 The farmers of Khourasgan, wearing white vest symbolizing the grave shrouds, a sign to the ultimate cost.

As the IRGC grew richer and more powerful, this same military force that today exerts influence in Syria, Yemen and elsewhere silenced farmers and environmentalists who protested river diversions by labeling them counter-revolutionaries, a crime punishable by harsh imprisonment. With its hands on the levers of power and its leaders’ pockets being filled from government accounts for these projects

The situation has put a lot of strain on the lives of many citizens in Isfahan, whose main source of income is agriculture.

The farmers of Isfahan are holding the regime responsible for the situation and have made this clear in their protests. During their demonstrations a few months ago, the farmers of Isfahan attended the Friday prayers with their back to the prayer leader, who represents the regime, and chanted “back to the enemy face to the country.” This slogan has become very popular and has been picked up by protesters in other parts of Iran.

Russian Mother And Child Allegedly Killed By US Airstrike In Syria