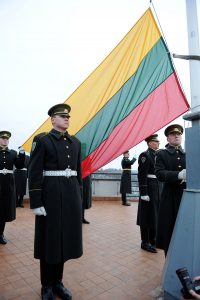 Military sources said today the U.S. military may deploy the Patriot missile system in the Baltics as part of a temporary rotation of troops in Lithuania. The news would herald a serious commitment to continue to build capability to defend the Baltic nations against perceived Russian aggression.

“We are here in a purely defensive stance. Everyone knows this is not an offensive capability. For anyone who says otherwise, I would just say I have too much respect for the Russian army to think that they actually believe there’s any offensive capability,” said U.S. Secretary of Defense James Mattis, reported the Associated Press.

At a news conference with Lithuania President Dalia Grybauskaite, Mattis said the U.S. “will deploy only defensive systems to make certain that sovereignty is respected. The specific systems that we bring are those that we determine necessary.”

The Lithuanian leader would only say that “we need all necessary means for defense and for deterrence, and that’s what we will decide together.”

A large-scale Russian exercise begins in August that will comprise over 100,000 troops in the Russian enclave of Kaliningrad on the border of Lithuania and Poland. Mattis said the Pentagon will be monitoring the exercise for signs the Russians are building stockpiles of weapons in the region.