An example of Tirana’s growth, with newer building occupying the once public space between commieblocks

Tirana’s shiny new “redevelopments” are set to continue. Mayor Erion Veliaj and Ditjon Baboçi, Head of Urban Planning in the Municipality of Tirana, have recently stated that a main city road will soon be redeveloped into a pedestrian road. Luigj Gurakuqi street, which currently links the Skenderbeg Square with the New Bazaar, is set to undergo a transformation.

Officially, the project’s goal is to link two important areas that have been transformed recently. Unofficially, the project aims to continue a slow process which is essentially choking off property owners, making their properties difficult to access, and therefore lower their prices for future redevelopments by the usual oligarchs that live off construction permits. This redevelopment is only one of the many projects that are slowly aiming the same result, in line with what Stefano Boeri, the architect in charge of the masterplan, called “the need to demolish old, communist-era buildings”.

What is happening across Tirana?

First we need to take a step back, and understand why the city has become so difficult to manage. Tirana’s central areas were once filled mainly with “commieblocks”, communist era apartment blocks in extreme symmetry and highly similar, until the 1990s, as shows the image below. They were mostly 4-5 story buildings, forming rectungalar apartment complexes around free public spaces. The rest of the city was populated with low single-family homes, a heritage of the ottoman and Italian periods, linked to the rest of the city through narrow alleys. Since the population density in these areas was low, these narrow streets were nonetheless sufficient. 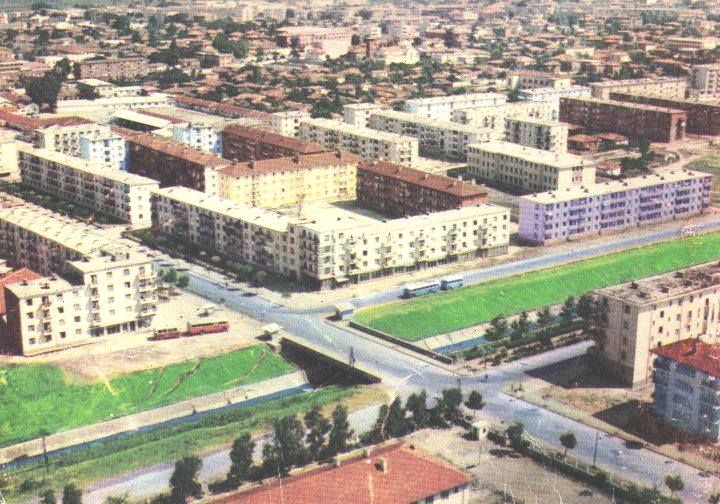 Commieblocks were typical across Eastern Europe, and Albania’s engineers and urban planners were simply imitating what they had seen in other socialist countries. The public spaces in the middle of building were designed to serve several purposes. They were reserved for recreational activities, but also served as parking spots and main access points to the buildings, thus leaving the main roads unclogged for optimal traffic flow.

By and large, none of the old commieblocks has changed much. Belgrade’s famous 61-63 blocks still preserve the public spaces, as the following image shows. The residents still enjoy the basic amenities that they once did. This can be seen across many former communist cities, with commieblocks retaining their public spaces. 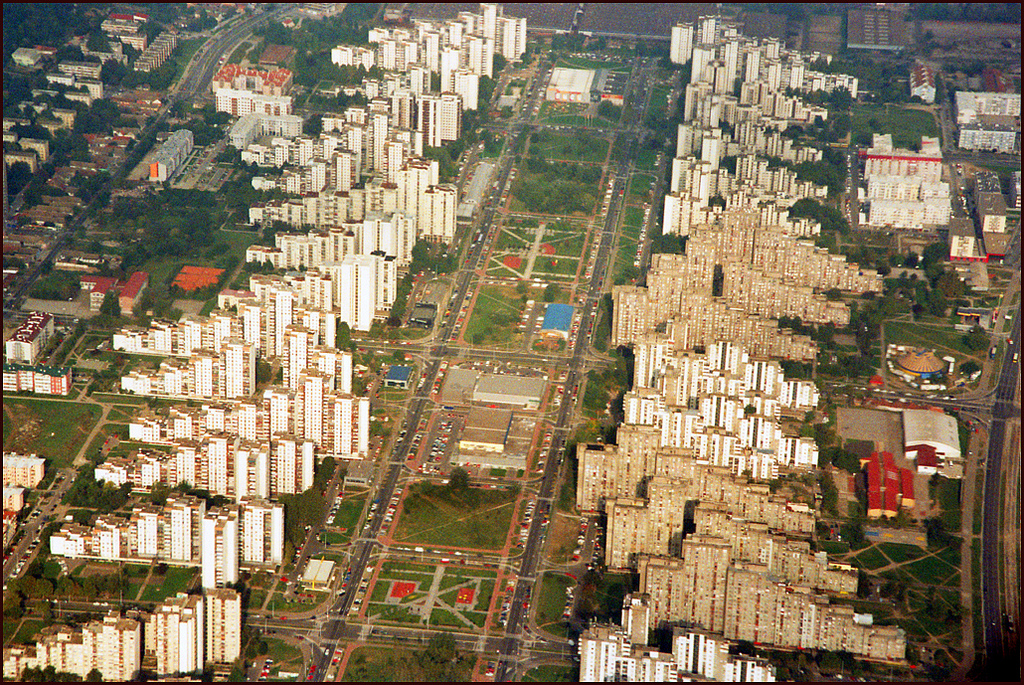 Belgrade’s famous 61, 62, and 63 blocks, a vivid example of the communist era urban planning

Tirana, though, is an entirely different story. Public spaces were turned into construction sites and the new buildings grew to become larger than the original commieblocks themselves. Aesthetically they made for a horrible view which is immediately noticeable. More importantly, the residents of the old commieblocks were pushed to use the main roads for both parking and access points. The new buildings have simply choked off, and at times outright blocked, the smaller streets inside the blocks. To better serve this process, during Rama’s first few mandates as mayor of Tirana, the city’s main roads were enlarged to help the older residents. Meanwhile, construction was intensified inside the residential blocks.

It should go without saying that such developments would not be allowed in most developed countries. Urban plans and/or zoning laws serve as a contract between the city and property owners, safeguarding the value of an investment in the future, thus protecting the constitutional right to private property. If city authorities allow any development which violates the original characteristics of the neighbourhood, they would either compensate the existing owners, or would have to buy off the entire area at market rates and redevelop it entirely. This is why instead of going through this difficult legal process most cities simply expand outwards. This is why all of Europe’s new business centers are located in areas far from the historical center. Developing inside the older areas would be an impossible legal hassle.

What is the municipality doing now?

Through new projects such as the bicycle lanes or the pedestrian areas, the municipality is in fact removing the last remaining areas for residential parking and access points for the commieblocks and older single-family homes that have yet to be demolished. Again, not only has it become impossible for residents to park near their homes in a city with little to no public transportation, but now it is becoming impossible for them to even access their homes.

The Municipality has claimed that these measures are being implemented to reduce the reliance on cars, we have shown that this is a complete myth. Essentially, all of these properties are becoming unusable, which drives down their value.

This is exactly the purpose of Municipality’s latest proposed project, the “redevelopment” of Luigj Gurakuqi street. The city center, one of the few city areas with large roads and broad pavements, is being redeveloped to increase “walkability”, even though it already has all the amenities for such a purpose. By pedestrianizing this road, two large neighbourhoods will be served by a one-way street, where parking and stopping aren’t allowed. With older alleys already clogged off, now two large city areas are almost impossible to reach by vehicles and, thus, practically isolated.

Luigj Gurakuqi street in black will be blocked off. This further reduces access options for current inhabitants of the area which use the road as the only option to travel towards the southern part of the city through some of the last remaining alleys.

The simple answer, as always, is: follow the money. As I have explained in my comment on Tirana’s new masterplan, the municipality and the big construction companies are not interested to expand the city into the suburbs, even though this is the socially optimal result. Tirana’s suburbs have been developed chaotically, without any urban plan or the required infrastructure, and consist mostly in single family homes. It would make sense to urbanize these areas and also allow a medium-density population development. This would spread the population of the city in a more equitable distribution. But this is not beneficial for the constructors, and therefore not beneficial for the politicians who protect them, for three reasons:

1. New constructions outside city’s center would not be as valuable in the short run. The value might rise in the future as the city expands, and newer areas gain prominence, but for the construction sector, and the politicians behind it, liquidity is key. Money is needed, and fast, to finance political campaigns and operations. There is no value in waiting for increased earnings in years and decades to come, when one can now build in the centeral areas of the city.

2. Outward expansion would require additional spending to improve public infrastructure, either by the private constructors or the municipality. Why do that when one can rely on existing infrastructure in the middle of the city? This is a cost for existing residents, but not for the politicians and the construction companies.

3. In order to properly develop new areas with symmetric blocks, such as the communists once did, the municipality would have to design an urban plan that properly designates the new streets and the type of development allowed, and then open the process for whoever is interested to invest according to the predetermined plan. However, this is problematic for large constructors. Once such a plan is approved and made public, land owners would hold all the leverage. They could also decide to develop the areas independently, therefore squeezing the constructors out of the market. It’s much better for them to profit from subjective building permits within the existing city.

In fact, this is what is happening near Luigj Gurakuqi streets. Confidential sources have confirmed for Exit.al that one of the country’s oligarchs has been recently pressuring the residents of the area to sell the property at below market prices, with the goal to redevelop the entire area from the Skanderbeg Square to the New Bazaar with a collection of high rise buldings.

Whether this turns out to be true will depend on many factors, mainly the residents’ ability to resist such plans. However, it is becoming ever clearer that the Municipality of Tirana is now a dedicated partner to such an idea. Bike lanes and pedestrian areas are not being developed to improve the city. Their main goal is to apply an increasing pressure to current residents to sell off properties at low prices, purchase new apartments, and increase the flow of money towards construction companies. It is not simple corruption and mismanagement of public funds anymore. The Municipality has joined forces with the oligarchs to apply an outright property theft in the middle of the city.

Johannes Estrada is a young economist in Albania. After studying and working abroad, he has returned back to his home country, with the desire and ambition to contribute on its progress and growth. He began writing on economic and political issues initially as a hobby, but it grew into a desire to change the underlying problems which hindered his country. He uses a pen name, as repercussions for those who stray from the government line in Albania, are usually severe and problematic for one's career and livelihood.

Competency And Legitimacy In Russia

Tell Me Again, Why Are We Defending Germany?