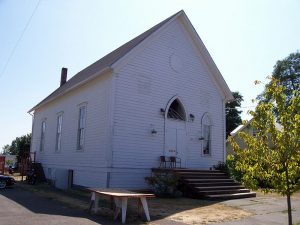 There is a lot of talk about evangelicals and Trump these days in America. Most of it accuses a lobby of “evangelicals” who somehow guide the Trump administration’s policies. These include stories of strange bedfellows, “the Israel lobby” and “evangelicals” working together to craft Trumpism. Evangelicals are also blamed for Trump’s anti-immigrant policies.

This feeds an anti-evangelicalism that is as conspiracy-driven as forms of anti-semitism. One person on Twitter writes “I’ve come to the conclusion that US evangelicals are also evil. Their leaders r trying to take over the govt and they’ve basically done it with Trump.” People tell tales of a “covert religious theocracy.” And yet people also claim evangelicals who support Trump are not following their own Christian values. “Conservative White Trump supporting evangelicals are a lot of things, but Christian isn’t one of them.” There is apparently some data behind some of this, show that “white evangelicals,” do not identify strongly with helping immigrants, for instance, while other US Christian groups do.

Pew asked Americans if the U.S. had a responsibility to accept refugees.

No group — racial, by age, religious or political — was less supportive of that idea than white evangelical Protestants.
https://t.co/q263yMnwEh

We also hear how Donald Trump made “promises to evangelicals” and now he’s carrying them through. How did this happen? Well, “Conservative Evangelicals are merely an arm of the Republican Party.” At the recent Christ at the Checkpoint conference the same narrative was put forward. As Brian Schrauger tweeted: “Munther Isaac and Alex Awad begin the conference #CATC5, castigating American evangelicals for “electing Trump and dashing hopes for Palestinian peace.”

The obsession with the “evangelicals control Trump” or “Trump works for an evangelical agenda” has gained a lot of traction in an America that still feels untethered and unsure of itself after the Trump victory over Hillary Clinton. People need a scapegoat. Abroad this also plays well, because shadowy “evangelicals” are an easy target. Mona Eltahawy writes: “The biggest cheer that Trump got at this rally in Tennessee and the longest anecdote he tells was about his decision to move the US embassy in Israel to Jerusalem. Appealing to the apocalyptic Evangelicals, always.” Like most of those who write about evangelicals, they don’t provide any proof for the presence of “evangelicals” at the rally, or that they all believe in the “apocalypse.”

The symbolism of scapegoating requires that there be little evidence for this “evangelical” influence. Unlike the George W. Bush administration, where faith and believe wore worn on the president’s sleeve, there’s nothing outwardly evangelical about Trump. His Vice-President is more in line with the theory put forward. But the way people write and talk about evangelicals today in the US paints them as a nefarious “hydra“, a shadowy lobby. It’s one that we don’t even need evidence for, we just need to be told enough times that “evangelicals do this” and “evangelicals do that” and we accept it.

It’s hard to understand the mixed messages also. Evangelicals support Trump, but Trump doesn’t behave as a Christian, and evangelicals are also declining in numbers and influence, we are told. They also represent “all that is wrong with America.”

People like easy explanations. When Trump won the election his victory was pinned on rural white male voters who had lost out under globalization and multiculturalism. But studies eventually made that story more complex. Nevertheless the public in the US has continued to fish around for other explanations. Trump is supported by “white nationalists”, the “alt-right”, “neo-Nazis”, racists, and Orthodox Zionist Jews.

The US decision to move the embassy to Jerusalem was a crucible through which all these theories were hammered. The BBC claimed the embassy move was not about peace. “In this case, his base also lobbied hard for the move. That included right-wing American Jews whose message was amplified by the conservative orthodox Jews dominating Mr Trump’s inner circle.” CNN had an article claiming that the Jerusalem decision was not about politics. “For many conservative evangelicals, Jerusalem is not about politics. It is not about peace plans or Palestinians or two-state solutions. It is about prophecy. About the Bible. And, most certainly, it is about the end-times.” Notice that no data is provided to quantify any of this. Evangelicals are never interviewed for these articles. We are just told what they think. Probably in no other case of journalism do we so often get told what a group thinks, without the writers ever having to meet or interview anyone from the accused group.

We hear about “growing” evangelical power and influence. One Washington Post article did actually note that half of evangelicals supported Israel because of “end-times prophecy.” It turns out that “Pew asked respondents whether the existence of Israel fulfilled biblical prophecy. About a third of Americans said it did — while more than 6 in 10 evangelicals agreed. (So did more than half of black respondents.)”

Hold on on second.

The poll found that black Americans also believe in similar ideas as evangelicals. Yet no one blames them for somehow controlling US policy? No matter, it’s evangelicals apparently who lurk behind all sorts of things in America, even if in reality they are sort of similar to their white or Christian peers.

Let’s look at how evangelicals actually voted. According to Pew 81% backed Trump in 2016. 78% also voted for Romney in 2012 and Bush in 2004. So basically the same. Yet there aren’t that many American evangelicals. White Christians are now a minority in the US. PBS noted in 2017 “shrinking ranks of white evangelicals, who until recently had been viewed as immune to decline.” According to this study “About 17 percent of Americans now identify as white evangelical, compared to 23 percent a decade ago.” In fact membership in some of these churches is dropping to the lowest level since the 1990s. Report after report talks about a decline in the number of evangelicals. And yet, paradoxically, they are blamed for having more influence than ever before. That’s convenient, sort of like how other small groups are sometimes blamed for having “disproportionate” influence or having “shadowy” control over governments, the media and banks. In fact newspaper articles have been quick to blame “evangelicals” for support for recognizing Jerusalem as the capital of Israel in Brazil and Guatemala.

Polls suggest that even among those who are defined as evangelical, who is and who is not actually an evangelical is not so clear. Some do not self-define as “evangelical” and others do not hold evangelical beliefs a 2017 poll found. The poll’s findings a bit confusing in trying to tease out how many people define as “evangelical” for political reasons. It also sought to show that among those holding these beliefs around 58% were white and 65% Republican. What that tells us is that the concept of evangelical is more opaque than most articles make it out to be.

There are also a lot of contradictory articles showing that evangelical support for Trump is at an “all time high” as well as slipping at times. For instance by December 2017 Trump’s support among this community was “down from 78 percent to 61 percent.” There is even debate among this group over their support for Trump. Nevertheless turnout among evangelicals remains high, allowing them sometimes to punch above their weight in constituencies. 62 million Americans voted for Trump. It’s not entirely clear how many of them were evangelicals or why Trump would necessarily be beholded to evangelicals particularly.

Hatred for and stereotypes about evangelicals underpin conspiracy theories about their influence. I’ll never forget sitting over dinner with a family member and being lectured about how “evangelicals” were behind Trump and his policies, particularly support for Israel. I wondered if that was true back in the 1990s when Democrats and Republicans had both supported recognizing Jerusalem as the capital. Were all of them secretly controlled by “evangelicals”?

And why does one need the hidden hand of “evangelicals” to justify moving the embassy to Jerusalem. Why is Israel the one country in the world where some “end times” story has to justify recognizing an embassy? The embassy of the US should have been moved to Jerusalem in 1949. It was never clear why the UN Partition plant that envisioned an international status for Jerusalem should be the law of the land forever, with its colonial overtones. In fact the UN obsession with Jerusalem at the time was more likely guided by the Catholic Church than today’s evangelicals guide Trump’s views. Other countries, without any evangelical support, moved their embassies to Jerusalem after 1950. These included Guatemala, Venezuela, Ivory Coast and eight other countries.

So why only in the US is there some “hidden” agenda of “end times” prophecy? What prophecy does Trump know about? There’s no evidence he cares about prophecy. And yet believe need “evangelicals” to blame for US foreign policy. The need to find small groups in America to blame for “controlling” US policy has long roots. It’s about scalegoating and othering and also finding a simple conspiracy explanation for everything that avoids nuance. It also deflects from “we Americans are at fault” to “those nefarious groups are at fault.” Then just look at American history and you’ll find blame cast on “freemasons” or “communists” or “globalists” or “Catholics” or “Jews” being blamed for US policies. Even recently a former well known US official blamed “Jews” for “driving America’s wars.” She then claimed she didn’t read the article so well, but that was the headline. So today the blame falls on “evangelicals.” The new culprit behind US foreign policy. No evidence is needed to show that anyone believes in what is ascribed to this group. Just keep saying “evangelicals” enough and it rings true. Oddly I’ve never met an evangelical who believes in all the hocus-pocus ascribed to them. I’ve known some Trump supporters on social media and never seen them push “end times” prophecies or any of the concepts they supposedly are guided by.

It might just be that today’s anti-evangelicalism is a new form of scapegoating others for what average Americans have done.

Who Are The Rojava Peshmerga, The Group That US Thinks May Help With Syria Crisis?