Starting from Albania, where you can find everything you need to spend an enjoyable summer – mountains, seas, rivers, lakes, wonderful landscapes, cheap prices and friendly people, but still some poor infrastructure, within a week you can also pay a visit to Montenegro, Croatia or northern Greece.

For Albanians, it is quite easy to travel to these neighboring coastal countries, due to short distances and various means of transport.

My own experience this summer was a weekend through Montenegro up to Dubrovnik, Croatia; then a 5-day trip to Northern Greece, Khalkidhiki peninsula.

Hurry Up And Split For Split!

We left Tirana by car early Friday morning, driving through north-west Albania, where you can find the nice beaches of Shengjin and Velipoja near Shkodra city, before crossing the Montenegrin border, just two hours from Tirana.

The first town you encounter is Ulcinj, mostly inhabited by Albanians….then Bar Tivar, Budva and Kotor, all seaside places. What they have in common are the costal castles and old towns with fortification walls; but you’ll surely notice the difference in development, comparing Ulcinj to the other three towns, where infrastructure is the poorest, as the central Montenegrin government provides little money to this Albanian town, according to natives.

Driving along the coast, you see little villages and seaside resorts, glittering blue sea water and small islands, which provide a wonderful view. The most famous is Sveti Stefan, a small islet with a five-star hotel resort. 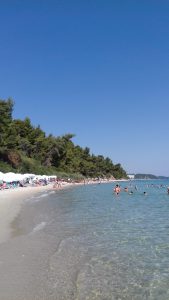 Budva is the next stop, with its 2500-year-old settlement on the Adriatic coast. The medieval walled city, established in middle ages under Roman Empire, then in 1455 under the rule of the Venetian Republic and later under Austro-Hungarian Empire, is very well preserved. Alongside, you find sandy beaches and diverse nightlife.

Kotor Old Town draws back to medieval times, 15-17 century, a fortification built during Venetian period, part of Unesco’s World heritage. You can enjoy something to drink or eat in numerous bars and restaurants within the Old Town.

The food is mostly local in Montenegro, not very delicious for us, as Albanians, used mostly to Italian good cooking.
Up to the Croatian border, it is a two-hour drive through a narrow twisting road. Crossing the Montenegrin border is not very easy for us… detailed control of passports and car, many questions to answer, as if we are not the same as tourists coming from other European countries. Anyway, answering smilingly to the border officers is the best way to be set free quicker.

The first town to encounter after you cross the border with Croatia is Dubrovnik (old Ragusa). It is situated on the southern coast, founded prior to the 7th century, as a Byzantine center. Then the old town was built during medieval ages, from 7-17 centuries. Dubrovnik old town is also protected by Unesco.

It is very difficult to find hotel rooms in Dubrovnik, without prior booking. The prices are high for an average person, even the food and drinks in bars and restaurants within old town are expensive, not to mention 6 euro/hour for parking the car near the center. But the breathtaking landscapes it offers makes up for a short stay in this fascinating town. Many big hotels lie on the coast, the sea water is deep blue, very clean and you can hire a boat and sail to small islands round Dubrovnik.

On Sunday, the return to Albania is better. A brief interaction with the border control on both borders, short breaks for coffee and a quick lunch in Budva.

Sunday evening found us at home. But soon afterwards, we were leaving for Khalkidhiki Greece; this time everything was arranged by the agency, including the hotel and bus trip.

In a couple of days, we started for Greece. Usually, there are buses that leave from Tirana by 2 am, crossing through eastern Albania, Kapshtica border. So we were surprised when we were told that we would leave by 10 pm one day before, in order to arrive at the hotel by midday the next day, and we had to cross both Macedonian borders, due to delayed procedures at Kapshtica, meaning we could spend a longer period travelling at night, to avoid late arrival at the hotel and not to miss the lunch.

It was a little bit unpleasant to think you would spend all night on a bus, but it was not so bad. Most of the people slept during the way and there were no delays on either Macedonian borders with Albania and Greece. Although it was night and you could not see well from the bus window, you could feel the poor Macedonian infrastructure; no investments, no lights or signs, as if you were travelling through some remote parts.

It was daylight when we crossed into Greece. It is highway from then on, so the bus could speed up a little bit.

After stopping for coffee and breakfast at the only auto grill you can find until you reach Thessaloniki, we headed for the northern part of Greece, Khalkidhiki, the peninsula of three fingers, as they call it.

Our hotel was situated in a little village called Kriopigi in Kassandra, the westernmost peninsula and the most developed one, full of modern resorts and nightclubs.

The whole of Khalkidhiki features Mediterranean forests and sandy beaches, where the most famous are Sani, Pefkohori, Pelichrono, Fourka, Posidi, etc., where night life is active. There is a thermal spa in Agia Paraskevi, while in Afitos you can see many orthodox Christian churches, stony houses and cobbled streets. Sani resort in the shadow of Mount Olympus is the most famous in the region. There are a lot of blue-flagged beaches in Khalkidhiki, as well.

Our village was simpler and cheaper compared to the above-mentioned places, but the wild nature it offers, full of forests and fresh air, nice little beaches, good accommodation and food, is more than enough. A funny train rides every hour from Kriopigi hotel to the beach, a 10-minute ride, from 9am to 6pm. The hotel is comfortable, with an outdoor swimming pool and a spa center. What makes an impression, compared to the Albanian coast, is the fact that there is no interference with nature. Everything is left original, even the small hotels and villas are in proportion with the surroundings, 2-3-floored buildings, simple but comfortable architecture. We found a lot of Albanian emigrants working at the hotel. The Greek people of this area are very friendly and quiet.

It was an amazing experience for us. We enjoyed everything and paid only 180 Euro/person for 5 days at all-inclusive hotel, bus trip included, as well.

The return trip was from our Greek border in Kapshtica, so it was quicker.

I invite everyone to have this experience… It will be amazing to visit Albania and then the surrounding costal Balkan countries within short time and not spending a lot. You will enjoy it.

The Loyalty Of Fear