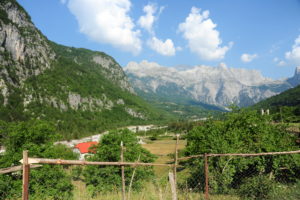 Theth is entirely located within a valley, which stretches like a huge bath in the middle of high mountains in the Shkodra district, Northern Albania. It is a breathtaking place, and once captivated Edith Durham’s attention, whose memorial welcomes visitors up the mountain gorge.

Thethi lies in the northern part of the Shala municipality and is built in a pit up to 740-950 meters. It consists of seven districts: Gjeçaj neighborhood, which is the first quarter you encounter when you enter Theth through T’Thore mountain pass or through the Sheep Path. Then, there are other neighborhoods, like: Gjelaj, Nikgjonaj, Okol, Ndreaj, Kolaj and Ulaj neighbourhoods.

To visit Theth, you must choose the right season. The best period is from spring to autumn. It seems foreign tourists have discovered this amazing place prior to Albanians, as they come here in huge numbers. Those who visit Theth each year are mainly Czechs, Poles, Americans, Israelis, and especially Germans. The village itself offers scenic views, as well as some advisable cultural sights to visit. Theth also offers inexpensive prices and bio food. At the Villa “Gjeçaj”, with only 25 euros, you will be provided a bed and three main meals. Sleeping conditions are good and rooms are equipped with personal bathrooms, with 24-hour hot water. 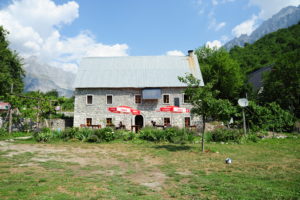 If you go to Theth, you should visit the Lock–in Tower, which served other provinces as well, to gather and to decide tribal arguments and even forgive blood feuds. More than 300 blood feuds have been resolved right there, in the Tower. One of the most prominent solutions of those times was putting the assassin’s baby on a cradle turned upside down, in front of the person who represented the family of the deceased. The child risked death, unless the cradle was turned right. If the other person let the child die, that meant blood was not forgiven. Few cases have been as such…

In 1892, Theth church performed its first service. Recently, it was reconstructed by a group of native immigrants, who live in America. What immediately catches the eye, are three magnificent lime trees in front of the church, brought to Theth from elsewhere and planted there years ago.

Build upon a rock, the museum is a rare cultural monument. But behind its door everything is poor. There are very few items that represent the area’s past and most of the building seems ready to collapse. So, the best advice is to admire it from outside.

It takes almost an hour and half normal walk from the village center, in order to reach Grunas waterfall. When you see it from distance, you will not be convinced of its beauty. But when you reach the destination, you understand that your climbing fatigue was worth it. The waterfall is about 30 meters high, with icy water, not advisable to swim in until July, when the weather is warmer. Grunas Waterfall is proclaimed natural monument by the Albanian government. 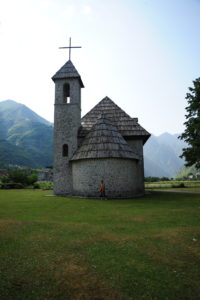 A GTZ project has made it possible for people to not easily miss the trails, if you want to see the canyon, as you can follow the painted signs on stones. But the best thing is to have a resident guide. Terraces date from Illyrian times and are well-preserved through generations. People have reconstructed them from time to time. Theth Canyon is one of the most fascinating views of the area.

To go to Kapre Natural Baths, you should pass from Nderlys, a village lying on a broad valley among mountains. Kapre is very close to it and its natural baths are strangely shaped and sized. This place, despite its extraordinary beauty, is dangerous because of the terrain itself and the way baths are reformatted from surging water. You’d better stay as far away from the dangerous parts as possible, because a negligent sliding move might be an irreparable mistake.

Blue Eye is located about two hours far from the Kapre natural baths. The path up there is only for pedestrians and passes on the edge of mountain abbeys. Downwards you see Theth River. 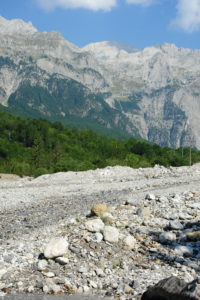 Of course, everywhere there are signs to help people not go astray. But the terrain is difficult, so you have to get your hands firmly stuck on rocks.

The view is magnificent! Blue Eye is like a big bath that collects water falling with high pressure from two meters high. Locals swim in the water in any season. They just want to challenge nature. One of the residents explains how you feel when you get out of the freezing water, like you are in an outside oven, as the contrast created with the temperature of the environment is great.