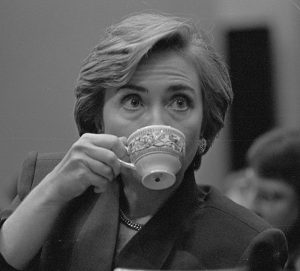 Americans do everything better than Russians, including corruption. In Russia, corruption is dirty, furtive, and is done at the whim of the supreme ruler Putin. If you govern a Russian province and are lining your own pockets, you’re in Putin’s pocket; at his whim he’ll let you be and at his whim he’ll put you in jail for life. Putin himself has to go through the charade of registering his palaces in the names of his oligarch buddies. In America, corruption is absolutely legal. If you are a Clinton, you set up a money laundering scheme for the world’s tyrants and call it the Clinton Foundation. Your cut, after you kick back the agreed upon funds to the tyrants’ favorite “charities”, handsomely pays for palaces and private jets, making the purchase of a Westchester County home right next door a spur of the moment decision, just in case you win the presidency and need to put up your Secret Service detail. Of course, they will pay you a completely legal rent, so nothing will go to waste.

But that’s if you are a Clinton and white and have all these pesky reporters following you. If you are an African America Congresswoman like Maxine Waters, you don’t really need to bother with the costs and paperwork that are required for a foundation. You simply sell your legislative services to the highest bidder and after living in one of the most expensive cities in the world for a few decades on a buck fifty public servant salary, your five million dollar mansion in San Francisco is ready to go. There is no protection that your race and your network of patronage in your congressional district will not afford you. 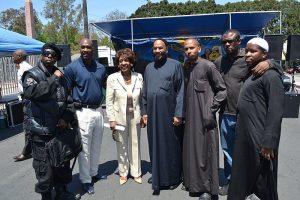 Of course if you spend your career in the underground corridors of the Deep State like Susan Rice, you belong to a yet another level. You don’t even have to pretend to “write books” or collect “speaking fees” like the Clintons or the Obamas. You simply emerge with a net worth of fifty million dollars having spent your entire career in the public service, never breaking the two hundred grand a year ceiling. You can go on TV and lie to the entire nation with complete immunity simply because you have enough “kompromat” on sufficiently powerful people to never fear the slightest consequences for your actions.

As America is belatedly finding out, equality before the law does not reach the highest levels of government except in the rare cases of white males like Hastert or Menendez who are dumb enough to abuse their power in ways that convolve simple influence selling with sexual shenanigans. In America, unlike in Russia, even corruption is governed by its own set of rules and these rules must be obeyed just like any others if one wishes to avoid having the blanket of protection yanked from him by his own peers.

So no, neither the Clintons, nor Maxine Waters, nor Susan Rice will ever be prosecuted for any crimes. But is that a bad thing? I think not. Another thing that America does better than Russia is use common sense. It is not commonsensical to put in jail the likes of the Clintons or Susan Rice or Maxine Waters. It makes martyrs out of them; it fosters a culture of fear among even the cleanest of public servants and politicians that once they are out they will be gotten at by their political opponents. Voted down that big project in your district? Expect the very rich and powerful people behind it to look for ways to get back at you once you decide to retire. Not a good thing overall, from the public good perspective.

In ancient Rome, consuls were elected for one-year terms and in times of war made dictators by an act of Senate, granting them absolute powers for the duration of the emergency. During their tenure in office, they were legally inviolate; however, once private citizens again, they were exposed to lawsuits from private citizens for actions taken while in office. This affected their decision making, often not for the better. In Israel right now, Prime Minister Netanyahu’s many political enemies are trying to get to him through a ridiculous prosecution of his wife Sarah for allegedly mismanaging the household accounts and personnel of the Prime Minister’s official residence, a place that wouldn’t even score a “real dump” mark on the Trump real estate scale. Netanyahu himself is being investigated for receiving a few quality cigars from friends and admirers. The Israeli Attorney General’s office has undoubtedly spent many millions of dollars of taxpayer money on investigations into possible corruption in the few thousands of dollars range.

No, America is better off doing what it does best; punishing the greedy bastards that find their way to the top of the pyramid by shaking its collective head and walking away from them with a slightly amused look on its face, leaving them to live off their ill-gotten gains in obscurity and begging their billionaire friends for private jet rides. There is no worse fate for these people than bruised egos and a long twilight of irrelevance; let’s not take it away from them by putting them on public trials. That’s the Russian way and the American way is always better.