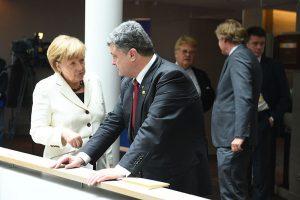 Ukrainian President Petro Poroshenko said today in Yalta that the IMF-backed independent court to fight entrenched corruption could take years to establish. However, he did say that an anti-corruption chamber (not independent from the current court system) could be set up as quick as next month.

The IMF is pushing Ukraine to tackle its systemic corruption problem before releasing the rest of its $17.5 billion aid package.

The IMF’s first deputy managing director, David Lipton, disagrees and was in Kiev this week to say so. “We certainly agree that the creation of an anti-corruption court is an important next step. We encourage the government to do that,” Lipton was quoted on Friday.

“There are risks of going backwards,” he added. When asked about more money being released from the IMF, Lipton said, “First, we need to see the reforms that are needed for this review to be implemented.”

Corruption has been endemic in Ukraine since the fall of the Soviet Union and stems from seventy years of direct Soviet rule.

Poroshenko has been criticized himself for protecting his own friends inside Ukraine and for going after opposition figures with law enforcement and anti-corruption agencies.

Russia Wants To Talk (To OPEC That Is)

A Year Under Sanctions, How Russian Banks Survive