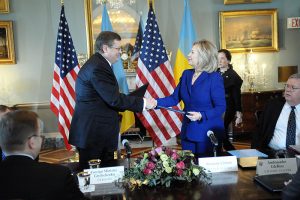 The “Trump colluded with Russia” narrative is alive and well in the United States. With the media and the Marxist left lacking any facts to support this falsehood, they have now resorted to guessing what evidence hackers overseas may provide to resuscitate their attempt to unseat a duly elected U.S. president.

The Associated Press and The New York Times reported this week that a Ukrainian hacker named “Profexer” had turned himself in and is now a cooperating witness for the FBI. The mainstream media is beside itself reporting what “facts” this new twist of the Russia story may uncover. Why do you need facts when you can pollute the news cycle with things you can make up about what a man might say about President Trump?

According to the AP account, “There is no evidence that Profexer worked, at least knowingly, for Russia’s intelligence services.” But hey — why does that matter when you can attach all kinds of innuendo and made-up stuff to an overseas arrest for hacking?

But that story aside, some real news is coming out of Ukraine on the collusion front. I’m not talking about Russian collusion against Hillary Clinton; I’m talking about collusion between the Democratic National Committee and the government of Ukraine to try to stop Donald Trump from winning the presidential election.

We all know what Mr. Trump said about trying to work with Moscow on the world stage during the campaign. Essentially, it was a recognition that Washington should seek better relations with Russia — you know, that really big nation that has the most nuclear weapons in the world. Mr. Trump essentially said we should respect Moscow’s concerns about its “near abroad” and work with Russia where we could to defeat the Islamic State and other threats to both countries.

This obviously didn’t sit well with Kiev, which has been fighting a pro-Russian insurgency in the eastern Donbass region for the past few years. Would Mr. Trump end sanctions on Russia? Would Mr. Trump end support for the Ukrainian armed forces in its conflict against Moscow?

Once in office, however, Mr. Trump has done just the opposite. He has buttressed support for Ukraine and even attacked a Syrian air base with 59 cruise missiles even with hundreds of Russian technicians deployed there.

Evidence has been released suggesting DNC operatives may have worked with the government of Ukraine to manufacture evidence against Paul Manafort, Mr. Trump’s onetime campaign manager who has emerged as a central figure in the Russian meddling probe. After speaking with the Ukrainian National Anti-corruption Bureau (NABU), I wrote in this space a year ago that they knew at the time that a “ledger” published in The New York Times supposedly showing that Mr. Manfort received illegal payments from a source tied to ousted Ukrainian President Viktor Yanukovych was bogus. NABU investigators clearly said at the time that the newspaper took the phony document from the internet.

This week, Ukrainian parliamentary member Andrei Derkach sent a letter to the country’s chief prosecutor demanding an investigation into illegal collusion with the Clinton campaign to defeat Mr. Trump.

“Only a transparent and thorough investigation into the unlawful interference of Ukrainian officials with the U.S. election campaign can restore the trust of our strategic partner,” Mr. Derkach wrote.

He said there has been “illegal interference in the election of president of the United States organized by a criminal organization” consisting of Ukrainian government officials, an effort that had harmed relations with the U.S.

I spoke with NABU officials again this week, and they provided a canned statement saying essentially they had washed their hands of the Manafort affair.

Will special counsel Robert Mueller do the right thing and investigate this collusion as well? Or will he act in a partisan manner and ignore the evidence?

This week we also found out that rocket engines from a Ukrainian factory may have found their way to North Korea and vastly improved Kim Jong-un’s ability to attack the U.S. mainland with nuclear weapons. I guess we are supposed to ignore this revelation as well.