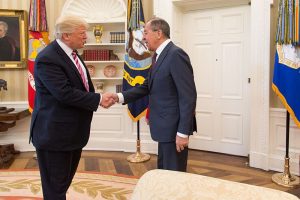 U.S. President Donald Trump urged Ukraine and Russia to ‘make peace’ in late night tweets on Friday. The tweets were accompanied by pictures of Trump with Russian diplomats Lavrov, and Kislyak, in the Oval Office. The meetings were private but Russia released the photos to the consternation of the White House.

Democrats had been fuming over Trump’s firing of FBI Director Comey and used the images as political fodder against the Trump administration. The president seems to be turning the bad publicity into an opportunity to work the ‘art of the deal.’ Peace between the two warring nations would be a significant foreign policy achievement.

“Yesterday, on the same day – I had meetings with Russian Foreign Minister Sergei Lavrov and the FM of Ukraine, Pavlo Klimkin. #LetsMakePeace!” the US president tweeted, reported AFP.

However, Trump had a political tweet up his sleeve as well, taunting the Democratic Party to his one hundred million followers:

“Russia must be laughing up their sleeves watching as the US tears itself apart over a Democrat EXCUSE for losing the election.”