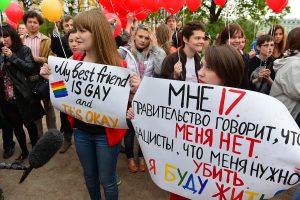 The Russian internet regulator has shut down a popular gay website for violating the anti-gay propaganda law passed several years ago. Gay.ru was shut down for ‘propaganda of nontraditional sexual relations’.

Gay.ru wrote Friday that Roskomnadzor served it a ban notice pursuant to a court ruling in Siberia that it “disseminated information that promotes non-traditional sexual relations.” An attached letter said the website’s administrators had 24 hours to remove unspecified “information prohibited for distribution in the Russian Federation.” If the website fails to adhere to Roskomnadzor’s orders, the state regulator gives its Internet service provider 24 hours to block access to the website. If the service provider fails to comply, Roskomnadzor will ban access to the website itself, reported The Moscow Times.

“We’ve been with you for 20 years, since September 1997 […] Our website is intended for persons over 18 years of age, whereof it contains an appropriate label,” said verbiage on the Gay.ru website.

The Russian anti-gay propaganda law does not prohibit homosexuality but does prohibit delivering homosexual propaganda to minors.