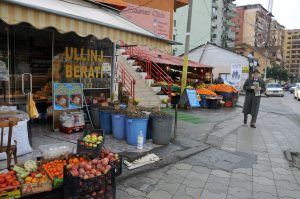 There are some foods that for most Albanians are a “Forbidden Fruit” because of the high prices at which they are being sold in Albania. Avocados, mangoes, passion fruit, and a host of exotic products are never purchased by most of the population. Similarly, soft blueberries are sold at stratospheric prices, almost 40 €/kg, while the wild blueberries found in the Albanian mountains are generally sold in foreign markets. Albanians buy the dry blueberries that are mainly used for tea at a very high price for their almost empty pockets. One kilo of blueberries which last year was sold 14 €/kg, this year is sold for 22-25 €/kg. In a detailed review by Monitor magazine, it is clear that Albania has the lowest average salary in Europe, excluding the countries of the former Soviet Union.

Wikipedia refers to INSTAT (Albanian Institute of Statistics) data for the average state salary in the state sector, which was 56,500 ALL at the end of the first quarter, while other INSTAT data shows that real wages in the economy, including the private sector, are still lower. According to INSTAT, the average monthly gross salary for an employee grouped by professions and gender at the end of 2016 was 45,845 ALL, so about 334 € gross or 290 € net. In the Albanian private sector, it is difficult to have real income data, since most employers work with two pay books, and only a part of the payout is usually declared, the rest is payed under the table. This concern arose several days ago at a meeting for the civil society organized by the Albanian Center for Good Governance when a journalist K.L stated that, “If the journalists rise and complain about It they are thrown in the streets by their employers”.

According to Monitor magazine, in Kosovo the average net salary is higher than in Albania, it fluctuates around 405 € monthly. In the region, according to Wikipedia, Montenegro has the highest average salary, 509 € per month, followed by Bosnia and Herzegovina with 439 €, Bulgaria with 423 €, Serbia 407 €, Kosovo 405 € and Macedonia 372 €.
Even measured by purchasing power accounting, where income is adjusted to living expenses, wages in Albania are still the lowest in Europe, at about $ 1000. In this ranking, Albania is surpassed even by Belarus, which has a lower average salary than Albania.

Montenegro has the highest wage measured in accordance with purchasing power, 1422 US $ -even higher than Portugal, Bulgaria Romania; and Kosovo (1251 US $) which surpasses Serbia and Bosnia. In both of these states, the real cost of living is cheaper, the salary being more sufficient to buy different products compared to Albania or other countries in the region.