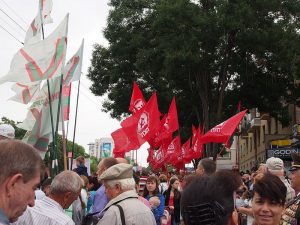 The Organization for Security and Cooperation in Europe (OSCE) said recently that “substantial progress” has been made on resolving the frozen conflict of Transdnistria in Moldova. The sliver of land wedged between Ukraine and the rest of Moldova has been a way for Moscow to maintain some influence over the former Soviet republic. Approximately 2,000 Russian troops are stationed in Transnistria to guard an aging Soviet ammunition depot as well as provide ‘peacekeeping’ services to the area.

The OSCE said in a statement that representatives from Moldova and Transniester attending talks in Vienna on November 27 “confirmed progress on several of the eight issues previously identified… and made a commitment to finalize the remaining issues at the beginning of next year.” The meeting held in the Austrian capital in the so-called 5+2 format was also attended by representatives from the OSCE, Russia, Ukraine, the United States, and the European Union, reported RFERL.

The OSCE statement, which was issued on November 28, quoted Wolf Dietrich Heim, special representative of the OSCE chairperson-in-office, as saying that the sides “further solidified the agreements on several social and economic issues signed in recent days.”

“There is a clear understanding among the participants that the remaining issues will be addressed and swiftly implemented,” said Dietrich Heim.

A protocol signed outlining the cited “recent significant agreements on the ground” read “the signed agreements on apostilization of educational documents issued in [Transniester], organization of interaction in the field of telecommunications, ensuring the functioning of the Moldova-administered Latin Script Schools, use of farmlands in Dubasari region, as well as the opening of the bridge across the Dniester/Nistru River between villages Gura Bicului and Bychok.”