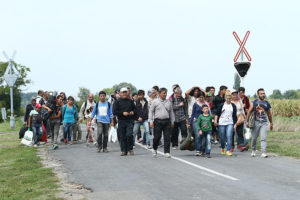 94 asylum seekers detained in Hungary have started a hunger strike, demanding to be set free. Hungarian officials say the detainees, being held at a closed asylum center in the southeastern city of Bekescsaba, broke European asylum rules and will not be set free.

The asylum office said in a statement to The Associated Press that the detainees receive regular updates on the status of their cases and that the situation at the center is calm, reports AP.

The migrants also complained about officials taking their fingerprints.

Hungary has angered EU officials in Brussels by being tough on migrants from the Middle East, erecting walls to keep them out of the country and training a new border force, called the ‘Border Hunters.’

The Hungarian legislature just passed a law allowing detention of migrants at the border in container camps.

Russia Hopes Anti-Doping Body Will Be Reinstated In November

Putin Shouldn’t Feel Too Good About Russians in the Baltics