The topic of the establishment of a Kosovo military force has enlivened debate between East and West.

According to TV Klan, Balkan analysts consider such debate as part of the conflict between the US and Russia. They believe most Western Balkan disputes are caused by an increasing Russian influence, especially in Serbia.

The army issue was brought into focus after the visit of Wess Mitchell, the US Assistant Secretary of State for European and Eurasian Affairs, to the Western Balkans a few days ago.

Mitchell is known to be a NATO and Transatlantic expert and is distinguished for his tough stance on Russia. His visit mainly aimed at supporting plans for a common EU future for Kosovo and Serbia. But the fact that he went first to Kosovo was considered a symbolic action by Kosovars. After acknowledging the ten years of progress, Mitchell underlined the importance of a dialogue with Serbia and the ratification of the border demarcation agreement with Montenegro. 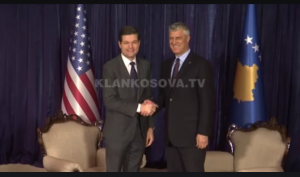 However, Mitchell also stated the need for the transformation of the Kosovo Security Force into a Kosovar military, stressing this would not constitute a threat for Serbia.

“No one has the right to veto on Kosovo’s security”, declared Mitchell before journalists.

Of course, the establishment of an army in Kosovo would require amendments to the constitution, including the consent of Kosovo Serbs as well, who have always opposed a Kosovar military force. According to Serb President Vucic, a Kosovar army goes against all international norms. He has doubts regarding compromise with Kosovo on various issues.

Russia has reacted strongly against Washington’s declarations in favour of a Kosovar army as well, stating this could stoke further tension in the region.

Aleksandar Radic, a political-military analyst, stressed it is normal for the US to support the establishment of Kosovar military, as the West wants KFOR to leave Kosovo. They want normal relations between Pristina and Belgrade. But it is the West’s fault to have left the Western Balkans alone for almost a decade.

Those against the US describe the Western Balkans as a front line. According to them, if Kosovo was attached to Serbia, the situation might lead to peace. But the West pressuring Russia may make the situation more tense.