With 80 votes for and 11 against, the Kosovo Assembly gave the “green light” to the demarcation agreement with Montenegro. The outcome was a result of four previously unsuccessful, tentative efforts to ratify the agreement. Every time, the “Vetvendosje” Movement opposed the vote, convinced that the division left part of Albanian territory inside Montenegro. Vetvendosje MPs used tear-gas in the Assembly hall, even today. 5 of Vetvendosje’s members were then excluded from the session.

The demarcation ratification with Montenegro was welcomed by many, but at the same time, they condemned Vetvendosje’s actions.

The US ambassador in Pristina, Greg Delawie, who has closely followed the Assembly sessions, said he felt disappointed with Vervendosje’s decision to impede again the demarcation voting.

Even Johannes Hahn, the European Commissioner, expressed himself against such behaviour that has no place in democracy. He stated the Demarcation voting will open the way to visa liberalization for Kosovo citizens. 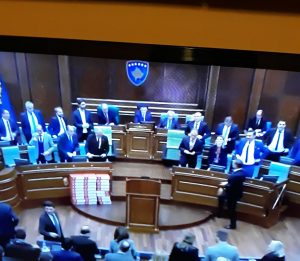 Kosovo President Thaci wrote on social media, “Kosovo has lost much time with the demarcation issue, creating political and social division. Today’s consensus gives great hope. We fulfilled our obligation; now we should work further with the reform package, to establish a new dynamic environment for the NATO accession process. The consensus reached in parliament should serve as a long-term platform of cooperation among political subjects. Also, the dialogue with Serbia is of national interest, so we should be united.

Both Albanian Prime Minister Rama and opposition leader Basha welcomed the ratification of the demarcation agreement, calling it a great contribution to preserving good neighborly relations and stability in the region.