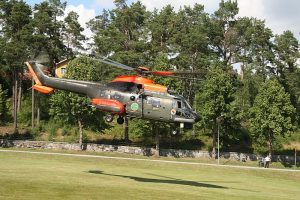 Swedish Defense Minister Peter Hultqvist told Ukrainian and US officials at the Munich Security Conference on Saturday that the Nordic country is ready to provide peacekeeping troops to the Donbass region of East Ukraine, but only if Russia and the West agree to such a deployment. Tensions between Russia and Sweden have risen in recent years due to perceived Russian incursions on Swedish waters and airspace. Sweden has also made overtures to joining, or supporting, the NATO alliance if the incidents continue or become more frequent.

“If we see the right conditions and if we see that this mission can help … then we are open to that…We are not there yet, but it is something positive,” said Hultqvist.

Ukrainian President Petro Poroshenko recently released a report he commissioned outlining the need for a 20,000 man force, made up of non-NATO members, to patrol the disputed Donbass region, along with a police force to support free elections in the future.

Russian President Vladimir Putin has signaled he is open to the deployment of a U.N. force in Donbass as a way to achieve peace in East Ukraine. However, the Kremlin envisions only a limited force along the forward line of troops, not one that has access to the Russian border, where Kyiv accuses Russia of supplying the separatists with supplies and weapons.

German Chancellor Angela Merkel has declared such a limited proposal a non-starter and called for a force that can police and patrol the entire breakaway region. However, the German Foreign Minister, Sigmar Gabriel, openly disagreed with Merkel’s position at the conference, saying Russian sanctions should be relaxed, even with some progress on the peacekeeping initiative in East Ukraine.

Was It Terror? Or A Gas Leak? Bus Explodes Near Russian Disaster Site

At Least One Dead In Sochi Flash Flood