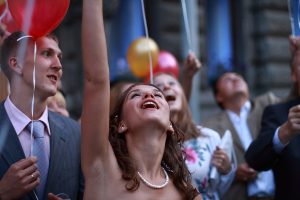 Working on one of my final stories as the Guardian and Observer’s Moscow correspondent, I took my seat at the Bolshoi Theatre one evening last December for the premiere of Nureyev. The ballet told the story of superstar dancer Rudolf Nureyev, who defected from the Soviet Union to the west. The premiere had been postponed at the last minute some months previously, partly due to its gay themes. In the interim between the cancelled premiere and the rescheduled one, the ballet’s director, Kirill Serebrennikov, known for his risque productions and political activism, had been placed under house arrest on embezzlement charges that most people thought were spurious. He’s still there and risks a long jail sentence.

Inside the Bolshoi’s gilded, celebrated auditorium, where tsars held their coronation concerts and Lenin and Stalin gave speeches from the stage, the hall was packed with the elite of Vladimir Putin’s Moscow. Theatre and television stars mingled with government officials and Putin cronies and they all sat through the powerful staging that dealt with the search for personal and artistic freedom under the oppressive Soviet regime…

Iran Arresting Large Numbers Of Women Protesting The Regime…Where Are The Feminists?