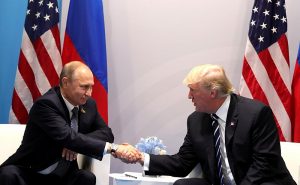 Russian President Vladimir Putin said this week that he thinks Russia will eventually achieve normal relations with the West and Washington/Brussels will get bored with sanctions.

“I believe that soon they will get bored with it. Those who do such things,” Putin told a congress of the Russian Union of Industrialists and Entrepreneurs on Friday. “I still do hope that we will achieve normal relations somewhow,” reported Russian state news agency TASS.

“It is business efforts that will largely determine how successful we will be in getting through it and what results we will achieve…You and me are aware of the external restrictions. I will not dwell upon them in detail. I will merely say that our stance is well-known: the policy of artificial restrictions in international business relations is a dead end, which causes direct losses and missed benefits to all, including the initiators of this policy.”

“Putin said that in the process of his contacts with foreign businesses he arrived at the conclusion that foreign business circles shared that point of view, too. In particular, he recalled the recent meeting with representatives of major French businesses and the just-held conversation with France’s president Emmanuel Macron,” reported TASS.

“We are positive about what we can do in cooperation with France and with other countries to develop our business ties.”

The Russian president also suggested the West was out to get Russia long before the Crimea annexation, “Just because some wish to treat us this way.”

Putin also declared new technologies may force cooperation in the future, citing “the new technological wave that is fundamentally changing the landscape of the world economy.”

“If you don’t mind my saying so, the deck of cards is being dealt anew. Fundamentally new markets of goods and services will be formed and new leaders will be emerging.”

“Apparently, the challenge of sanctions is not temporary and most probably will last for a certain period…But let me say once again that I do hope that common sense will prevail and we will be moving with all of our partners in the right direction in the interests of the world economy.”

Telegram Is No Longer Safe It Seems