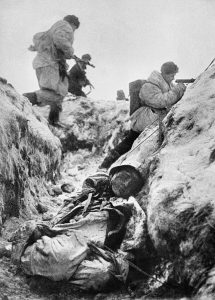 Russian media outlet Novaya Gazeta has reported on the premier of a film in Moscow which suggests Russian President Vladimir Putin has a special gene, born of mutated survivors of the Nazi siege of Leningrad, which has given him special powers to preserve the Russian state. The 900 day battle, which saw over a million Russians die of starvation, shelling, and disease, is epic in the minds of Russian citizens. President Putin often talks of his families hardship during the war, and the loss of relatives.

According to Blockade Blood, Genetics, it gives the holders a “high responsibility for what is happening in the country and the city,” reported Novaya Gazeta.

“January 18 in Moscow will be a closed screening of the film “Blockade blood. Genetics “directed by Eleonora Lukyanova about the besieged Leningrad, filmed with the support of the party” Fair Russia “. The film, which will be shown on Thursday by the staff of the Ministry of Culture, the State Duma and veterans of the Great Patriotic War, tells that people who survived the siege of Leningrad inherited special genes that were mutated due to numerous deprivations to their children – among whom the film mentions politicians Vladimir Putin and Sergei Mironov. The genes allegedly had a significant impact on the behavior of the blockade men and their children,” reported Novaya Gazeta

Narration of the film asks, “Those who survived the blockade, like Daniil Granin, Valentina Maksimova, Artur Chilingarov, Alisa Freindlich, Boris Strugatsky, Viktor Konetsky, Ilya Glazunov, Alexander Gorodnitsky; or the children of the victors, representatives of the first post-war generation, born in this special place – Vladimir Putin, Patriarch Kirill, Sergei Mironov, Sergei Ivanov, Sergei Naryshkin and many other residents of St. Petersburg now – all share a common demeanor, high responsibility for what is happening in the country and the city. Why are most of the townspeople united into one psychologically-behavioral group and is there no single root connected with the general physical and moral tests of the ancestors?”

Of course, this narrative is part of the Kremlin’s campaign to assure the re-election of Putin in the upcoming Russian presidential election on March 18th. Moscow wants a very high turnout, above 70%, to bestow legitimacy on Putin’s fourth term.