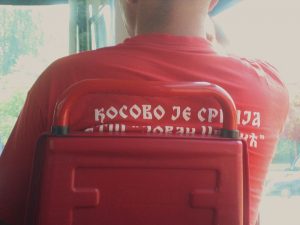 Currently Serbian President, Aleksandar Vucic, is paying a two-day visit in Mitrovica, Kosovo. The aim of the visit is to ease tensions among Kosovo Serbians living in the city after the murder of Serbian politician Ivanovic by assailants still unknown. There are 40,000-50,000 Serbs living within Kosovo.

Under many heavy security, he paid his respect to Ivanovic, as a leading moderate Serbian politician in Kosovo, by placing a wreath on the spot where he was shot dead. Hundreds of Kosovo Serbs welcomed him, weaving Serbian flags.

Earlier the day on Saturday, Vucic was in the Orthodox Serbian Monastery of Banjska, 15 km north of Mitrovica. He spoke in front of his people stating, “Serbia is determined to make every effort to ensure peace and security in Mitrovica. We will do our best to solve the long-term disputes with Kosovo. Meanwhile, let’s see how Kosovo police will lead investigations on Ivanovic’s murder”.

Addressing the Kosovo Serbs, he continued, “Serbia will always help its people. You are living in the territory where you have always lived. Serbia not only wants peace, but will strive hard to preserve it in the region”.

In the meantime, investigations into Ivanovic’s murder continue. The police have not yet certified that the burnt car found in the suburb on the day of the murder is involved in the crime. According to the Mitrovica Police vice-director, the car’s origin is from Serbia. All its proprietors have been Serbian people. The police came to this conclusion through international information.

Vucic was interrupted several times during his afternoon press conference by Serbian people who demanded he take measures to protect them from the Mafia, which threatens citizens’ life in Mitrovica.

Trailer: Russian Version Of “Miracle” Rakes In The Cash At Box Office

Polish Lawmakers Push On With Near Total Ban On Abortion