We were not going to report on the allegations of a young prostitute, calling herself Nastya Rybka, in the Russian press as it seemed scandalous for scandal’s sake. However, the issue is just not dying down in Russia with independent media continuing to report on the allegations Russian opposition figure Alexei Navalny released in a video tape recently. The investigation alleges Russian oligarch Oleg Deripaska invited Russian Deputy Prime Minister Sergei Prikhodko on board his yacht in 2016 where a young Belarusian woman was there as a high-class escort for his enjoyment. Navalny argues this is evidence of corruption in the Kremlin. 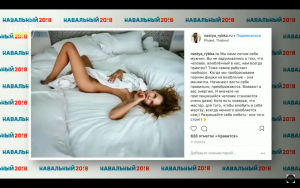 The video is below. You can make your own conclusions. Closed caption is available on the video.