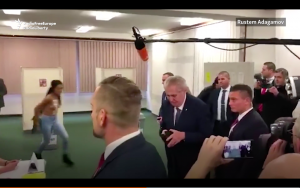 Czech President Milos Zeman was attacked by a ‘Femen’ activist as he voted today in the Czech presidential election, where he is expected to win but could possibly face a runoff.

The topless woman had “Zeman, Putin’s Slut” painted on her chest and was screaming the phrase over and over again. She was immediately wrestled to the ground by bodyguards.

“As you can see, my security detail works quite well because she did not get to me,” said the Czech president. Zeman added, he was “honored to be attacked by a member of the Femen movement, which has also attacked the pope.”

“Femen, an international feminist group that originated in Ukraine, said on its website that the woman was Ukrainian citizen Angelina Diash,” reported RFERL.

Zeman has been accused of being too close to Russian President Vladimir Putin and has called Russia’s annexation of the Crimean peninsula an ‘accomplished fact.’ He has also been very critical in the EU’s enablement of massive Islamic immigration. The Czech Republic has refused to allow any further migrants into its territory and is facing sanctions from the European Union, along with other Visegrad countries, Hungary and Poland.