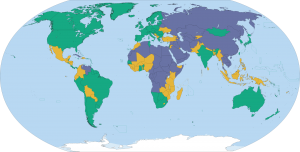 In the 2018 Global Report published by Freedom House, Albania stands at 68th place, getting 3 points out of 7, considered only a partially free country, again. Corruption still remains its main problem, according to the report, which states Albanian progress towards judicial reforms is slow.

After a close survey of 2017’s main events, only the political elections are considered as generally convincing. For the rest, Freedom House is very critical. The report states that key institutions of anti-corruption, such as the election of the temporary General Prosecutor and that of the General Inspector of Property Declaration & Audit and Conflict of Interest Office, were elected by parliamentary majority only, by the same party. So, such institutions do not have independence.

Regarding the drug issue, confidence in the progress of decreasing cannabis cultivation faded by doubts that former Minister of Interior, Saimir Tahiri, was involved in the narco Albanian-Italian traffic.

The Albanian governmental strategy against corruption was centred exclusively on administrative corruption, neglecting political and public-private attempts to capture the state.

According to Freedom House, success in the fight against corruption was diminished when Ilir Meta, the former Head of Socialist Movement for Integration, was elected President of the Republic. He was strongly contested by Albanians, who consider him a symbol of corruption. FH bases the conclusion on a letter published on the internet page of the US Congress in May 2017. The letter was sent by former Albanian General Prosecutor, Adriatik Llalla, through which he reported that in a meeting in 2015, the US Ambassador in Tirana, Donald Lu, suggested to him the arrest of Meta as a corrupt person who was hindering justice reform in Albania. According to Ambassador Lu, such an action could help Albania with EU integration. The General Prosecutor refused the advice, telling Lu it was an illogical request; he could not arrest someone without evidence, as it might have caused political and social Instability in the country.

But the fact that the Freedom House report brings to light the same issue by mentioning Ilir Meta as corrupt shows that the the US wanted his arrest, according to online media Lapsi.al, which has also published a facsimile of the 2017 letter.

The Freedom House report concludes that Albania has the possibility to progress in democracy. However, if corruption is not fought at a high level, the country may fall into autocracy.

Kosovo Welcomes Suggestion To Rename Its Lake After President Trump