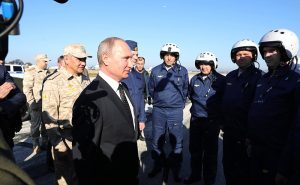 DONALD Trump has told Russia to “get ready” for American “smart” missiles heading to Syria – after Moscow insisted it would shoot down US rockets.

The US President issued the extraordinary threat on Twitter following comments from senior Russian officials that Vladimir Putin’s military would strike US bomb sites in retaliation to American aggression.

Trump tweeted: “Russia vows to shoot down any and all missiles fired at Syria. Get ready Russia, because they will be coming, nice and new and “smart!” You shouldn’t be partners with a Gas Killing Animal who kills his people and enjoys it!”…

To read more visit The Sun