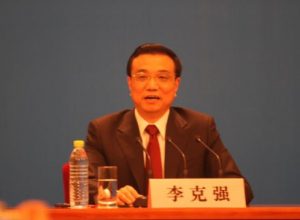 Chinese Premier Li Keqiang arrived in Hungary to participate in a 16 nation summit from Central and Eastern Europe. Hungarian Prime Minister met Li Keqiang at the airport in Budapest.

“China’s “new Silk Road” initiative of ports, railways and roads to expand trade across Asia, Africa and Europe is expected to be one of the themes of the “16+1″ summit. Hungarian Foreign Minister Peter Szijjarto said Sunday that China and the 16 countries at the summit would sign 23 cooperation agreements, while Hungary on Monday will publish the public procurement tenders for the reconstruction of the railway line between Budapest and Belgrade, the capital of Serbia. The project is being financed in large part by China,” reported Associated Press.

China is keen to promote its One Belt One Road initiative as a new way to connect Europe and the Chinese Far East. The Middle Kingdom has typically used financing as a way to open doors in many countries where the railway will pass.

There has been pushback from some countries worried that Chinese workers, imported to build the infrastructure, reduces or minimizes the gains made by host nations for the new ‘Silk Road’.