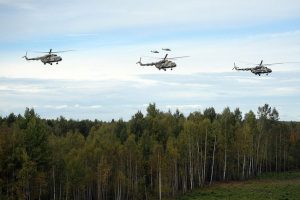 The commander of American forces in Europe, Lieutenant General Ben Hodges, doesn’t trust the Russians regarding the upcoming Zapad (West) 2017 exercise which will be held in Kalingrad, western Russia, and Belarus, from the 14-20th of September. Holding a joint press conference with Lithuanian Defense Minister Raimundas Karoblis in Vilnius on Friday, Hodges suggested Russia should invite the media to observe the exercises so that the West would feel more comfortable.

“The Russians had not given us a lot of reason to trust the numbers that they say. But again, the exercise hasn’t happened yet, so we don’t know what they are going to do,” said Hodges, reported The Baltic Times.

“If the Russian Federation is truly interested in stability and security, then be transparent, invite media to see everything that they do. In the West, we have journalists, think-tanks, parliamentarians, civic organizations, they come to every exercise that we do, so that people don’t have to be concerned or worried about what we are actually doing.”

“So what is the risk could be alleviated with transparency. We have Russian inspectors come to our exercises all the time. I’ve had Russians visit me in Germany, Poland, Bulgaria during exercises. I would love to have them follow me around all day just to lower the temperature and to build some confidence.”

“But we also have to always remain vigilant, to continue to try to understand what potential adversaries are doing. Of course, the Alliance faces several different types of threats. Being alert is the responsibility for all of our security services.”