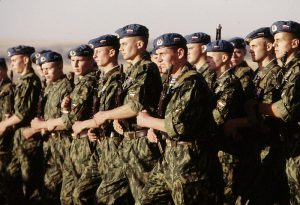 NATO Secretary General Jens Stoltenberg will visit NATO troops operating in Poland as part of a tripwire recently established by the alliance to deter Russian aggression in Eastern Europe. The North Atlantic Treaty Organization, or NATO, has recently stationed rotating battalions of armored forces throughout the Baltics and Poland. The troops are not technically permanent forces as to not break previous legal agreements.

The alliance is concerned over a massive military exercise Russia is holding with the former Soviet territory of Belarus in September, called Zapad 17, or West 17. Concerns over the placement of military equipment for future use and even outright invasion have surfaced in the press recently.

“Stoltenberg will hold talks with Polish President Andrzej Duda in Warsaw on Thursday before travelling to the NATO base in the northern village of Orzysz, Tomasz Szatkowski, Poland’s deputy defence minister, told local media on Tuesday,” Reports Channel News Asia.

“Poland has become for the United States Army the centre of gravity for everything that we’re doing in terms of deterrence,” said General Ben Hodges last week, commander of U.S. ground forces in Europe.

“Putin would like to test NATO … and probably the best area for him to test is the Baltics,” Lithuania’s Defence Minister Raimundas Karoblis, fearing 100,000 Russian troops will be involved in the exercise.