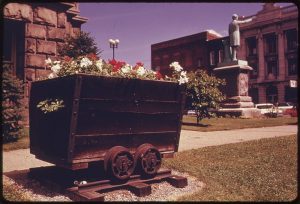 The Trump administration is celebrating the first shipment of American coal from Pennsylvania to Ukraine. The coal will be delivered to Ukraine’s national utility, Centrenergo.

Energy Secretary Rick Perry said, “This shipment will boost both of our country’s economies by supporting jobs in the coal and transportation industries. The department and this administration look forward to making available even more of our abundant natural resources to allies like Ukraine in the future to promote their own energy security through diversity of supply and source.”

President Trump sealed the deal with when meeting with Ukrainian President Petro Poroshenko in June. The coal will leave the port of Baltimore and arrive in Ukraine in September.

“A delegation that included Energy and Commerce department officials held a meeting at the Port of Baltimore Monday with Ukrainian Ambassador Valeriy Chaly and U.S. coal executives from XCoal, the Pennsylvania mining company that secured the deal with the country’s utility,” reports the Washington Examiner.