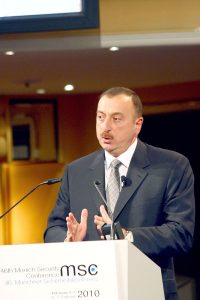 President Ilham Aliyev won a landslide victory in the snap presidential election in Azerbaijan on April 11 in what was essentially a foregone conclusion.

His victory was made clear by preliminary results issued by the country’s central election commission (CEC). Thus, Aliyev received 86% of the votes based on a count of 92% of the ballots, Mazahir Panahov, chairman of the CEC, announced in a press conference. Aliyev ran virtually unopposed. He has spent his past 15 years in office sidelining potential adversaries.

Aliyev will continue his presidency with an extended fourth term until 2025. Following the results of a referendum in 2016, he now enjoys even greater powers than before, and is poised to appoint a family member, likely his son or his wife, to succeed him…