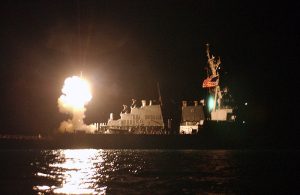 U.S. President Donald Trump has authorized and directed missile strikes against Syria in retaliation for chemical weapons attacks against civilians outside Damascus last week. Reports are saying France and Britain were also involved in the attack.

“A short time ago I ordered the United States armed forces to launch precision strikes” on targets associated with Syria chemical weapons, Trump said in a televised appearance Friday night.

Fox News is reporting Trump was very emotional after seeing images of children suffocating due to chlorine and possible nerve gas attacks.

21:54 EST Syria Declares It Shot Down 13 US Tomahawk Missiles

10:07 EST Secretary Mattis says this is a one-time action, Russian not notified