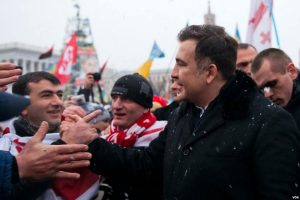 The former president of Georgia, and governor of Odessa in Ukraine, Mikheil Saakashvili, has vowed to return to Kyiv and rebuild his political movement after Ukrainian President Petro Poroshenko revoked his Ukrainian citizenship. The two had a nasty falling out of Saakashvili’s accusations of corruption against the Ukrainian government.

Saakashvili has also been charged with corruption in his native country of Georgia and the Georgian government is attempting to extradict him from Ukraine. Until now, Kyiv has prevented this from taking place; however, the Ukrainian government has now said it would allow the extradition to proceed. Saakashvili lost his Georgian citizenship in 2015 when he became naturalized in Ukraine.

“Speaking to the BBC’s Newshour programme from New York, Mr Saakashvili, who heads an opposition party in Ukraine, said Mr Poroshenko was trying to remove his most serious opponent.” wrote the BBC.

“I’ll do my best to return to Ukraine,” he said, calling President Poroshenko “extremely unpopular”.

Saakashvili maintains the charges in both countries against him are politically motivated. He resigned the Odessa mayoral post after concluding the corruption in the local economy was intentionally overlooked by Kyiv and oligarchs close to Poroshenko were preventing reforms.

The former Georgian president has denied he is seeking the presidency of Ukraine but this possibility may be behind the Ukrainian government’s decision to revoke his citizenship.

Saakashvili To Return To Ukraine On September 10th