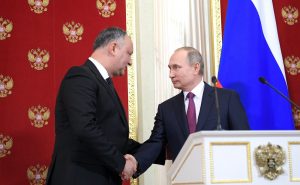 Tensions between Moscow and the pro-EU government of Moldova have been rising for several years as Russia has increased its interference in the internal affairs of the former Soviet republic. In 2015, 20% of the Moldovan treasury disappeared in a massive bank fraud in the poorest country of Europe. Many fingers pointed to the Russian security services and some analysts allege the funds were traced back to Russia.

The Prime Minister’s government has been pushing to move closer to the European Union and away from the orbit of Moscow. The Kremlin seems determined to prevent this from happening.

After the theft, the presidency was swung to pro-Moscow forces as Igor Doyon was sworn in. His first trip abroad was to visit Russian President Vladimir Putin.

Moldovan diplomats have accused Moscow of harassment during travels in Russia. The Moldovan government has demanded Russian troops be removed from the breakaway region of Transdniester, where Moscow has stationed forces since the war in the early 1990s that killed several hundred people. Recently, the Romanian government refused to allow Russian aircraft to overfly Romanian airspace to visit President Dodon in Moldova. The Kremlin was not amused.

Russia’s Deputy Prime Minister Dmitry Rogozin has described the Romanian authorities’ decision to refuse permission to a civilian plane carrying a Russian delegation to Moldova for talks with President Igor Dodon as a “demarche addressed to the Moldovan president…As a matter of fact, it was a demarche addressed to the Moldovan president,” Rogozin said, reported Russian state news agency TASS. Rogozin was also scheduled to travel to Bendery for special ceremonies on the occasion of the 25th anniversary of the peacemaking operation in the Dniester area.

Rogozin later had harsh words for Romania, and Hungary that also prevented overflight to Moldova of his aircraft. “The sharp tonality of my utterances reflects my emotions over the inconveniences over what happened to the passengers on our flight,” Rogozin wrote in Facebook. “Most of them were returning home. I always traveled to Moldova by regular flights of Russian airlines. The shameful stunt of the Romanians and the Moldovan government requires careful analysis and precisely calculated stinging countermeasures.”

“And being the way we want to be, that is, free and strong would be the best response to all these sanctions and dirty tricks,” Rogozin indicated. “And we’ll decide in the regular course of business how to knock the hell out of those vile creatures.”