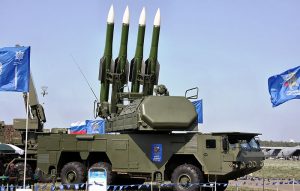 The Russian government said that Syria air defense systems, supplied by Moscow, and ‘completely overhauled’ by the Kremlin’s technicians, shot down 70% of the 100 plus projectiles fired at Syrian chemical weapons facilities. The claims cannot be verified and are most likely highly inflated. Russian cannot afford to have its air defense systems shown to be defeated by Western aircraft and technology.

Russia apparently did not fire its vaunted S-400 system against the incoming Western missile strike.

“The Russian military has claimed that the Syrian air defences, whose most modern weapon is a three-decades-old Russian-supplied anti-aircraft system, shot down 71 of 103 missiles fired by the US and its allies, the UK and France. As further details began to emerge about the sites targeted by the US-led strikes, Col Gen Sergei Rudskoi of the Russian military said the strikes had not caused any casualties and that Syrian military facilities suffered only minor damage,” reported The Guardian.

The Chinese and other customers of Russian hardware would also be very curious as to the performance of Russian technology.

Syrian air defenses have always been a big concern for Israel as the Jewish State has been proactive in destroying Syrian air defense technology to prevent Hezbollah and other Iranian proxies from gaining a further foothold in the Levant. After the attack last night, Russia threatened to provide Syria with the S-300, a follow-on to the very-capable, and feared, Vietnam era SA-6, which downed many American fighter jets.