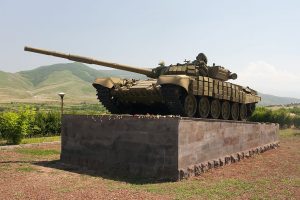 Azerbaijan’s defense minister, Zakir Hasanov, declared in an interview with RIA Novosti that the Kremlin intervened with Azerbaijan to stop its military advance into Armenian lines during the conflict which flared last year in Nagorno-Karabakh.

“They know that if no one intervenes in the situation, they wouldn’t last for three days. This is what happened in April 2016. If they hadn’t stopped us, the resistance would have been broken. In 40 minutes we ran over the lines of defense that the enemy had been building for many years,” said Hasanov, reported Eurasianet.org.

Hasanov described a phone call from Russian Defense Minister Shoigu, “He said ‘this business’ had to stop, the leadership of the countries were going to talk about it.” Russia may have had leverage over Azerbaijan due to being a customer of Moscow for weapons purchases.

He also spoke about future arms purchases from Russia, “We’re placing a priority on maneuverability, increased striking power, and more precision strike. I’m not going to go into details,” he said. “We’re now further studying several models of weapons, inquiring, testing. Buying arms is a multifaceted issue. From the one side, you need to diversify, on the other hand variety creates problems in servicing. It’s a very difficult question.”