We humans love war. In fact we love it with a burning passion; we love it more than we love life itself. We love it more than anything. If you don’t believe me, look around. War is the one constant of all human societies from the yet uncontacted Amazon tribes to the United States of America. Anthropological research shows the Biblical parable of Cain and Abel to be right on the money; even the smallest tribes, living in areas with extremely low population density and not having to compete for resources will attack each other and go to war for no reason that is apparent to us. The mutineers from the Bounty arrived on Pitcairn Island in 1790. Among them were nine British and six Polynesian men. When they were “re-discovered” in 1814 by the Royal Navy, John Adams was the only man remaining, the rest having been lost to war and murder among the members of the small group. The Bible teaches us that it only takes two human beings simultaneously living on planet Earth to have war. It is so.

The most oft-repeated blatant lie that you will ever hear is that “nobody wants war”. If that were even remotely true, why would war be the one constant among all human civilizations throughout history? The truth is the diametric opposite of that statement: everybody loves war. In fact those who are best familiar with it, wartime generals like Mattis, love it the most. There are countless books written by countless generals who describe the horrors of war in one sentence, only to admit to loving it more than their own lives in the next. War is by far the most resource-intensive, the most grandiose, and most crucially the most profitable of all human endeavors. The Biblical prophecy of making ploughshares out of swords when the lambs lie down with lions is eschatology, not reality; wars will only stop when the ultimate human buries the penultimate one.

President Trump’s self-admitted change of heart with regards to Afghanistan has less to do with the so called “terrorism threat”. The US does not have to be present in Afghanistan to prevent terror groupings from hatching out in that God-forsaken country. Blackwater CEO Eric Prince’s outsourcing plan, while obviously self-serving, was undoubtedly the most effective and efficient way to deal with any terror threats emanating from Afghanistan. Trump’s about face came from realizing, once the numbers were shown to him that far from being a financial drain (a trillion dollars!), war, including the Afghan war is an exceedingly profitable endeavor. Simply put, humans would not engage in war had it not been profitable. Financiers would not finance it and it would simply not happen. In reality though, few if any enterprises have ever gained more enthusiastic financial backing from private investors than war. There is a direct correlation between the standard of living in a country and the size of its military-industrial complex. So every time Americans pull their brand new SUV’s into their double garages and observe their walls festooned with canoes and mountain bikes each costing far more than an Afghan’s family annual food budget, they have the American military and the American military industries to thank for their unprecedented affluence. 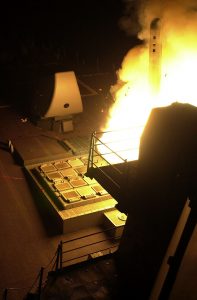 A nation’s military is not a can of beans that one puts on a shelf for a rainy day. It is a living, breathing organism that needs constant care, investment, training, and use. The 19th century Russian playwright Anton Chekhov famously noted that if a gun makes an appearance in the first act of a play, it had better go off in the second. It is utterly unthinkable for America to have ten times the defense budget of the Russian Federation and not be engaged in constant warfare. Huge conflagrations such as world wars are bad public relations and tend to get out of hand. Even smaller regional conflicts like the Vietnam War can be politically tricky. Thus low-level operations such as Afghanistan are highly sought after. These are operations that are substantially similar to homeland defense in times of peace along a country’s borders. The US, being a global mercantile empire similar to ancient Rome and 18 – 19th century Britain, cannot allow the borders of its trade interests to coincide with its actual geographic borders. The borders that count are not the borders with Mexico and Canada; they are the borders with global allies and competitors such as China, India, Russia, and the European Union. That is why the US military is deployed precisely in these places; in Europe, in the Far East, and crucially in Afghanistan, which is the ancient fault line between the Indian and the Chinese civilizations.

Recently, tensions are escalating between China and India over a territorial dispute in the Himalayas and there is even talk of war. The Trump administration is eager to leverage this conflict to get concessions from both India and China. Having credible military presence in next door Afghanistan is crucial for the achievement of that goal. Pakistan is so far the only majority Muslim country with proven nuclear capability. American military presence in Afghanistan on its western border provides the anvil to India’s hammer at Pakistan’s southern border, making it a much weaker adversary and providing an invaluable service to India for which a high price in geopolitical cooperation and lucrative arms contracts can be extracted. The biggest threat the US with its dependence on undisrupted global trade is facing today may be Iran. The source of the threat is the Iranian posture of prioritizing its ideology of Shia Muslim dominance over world peace and stability. American military presence in the Persian Gulf and in Afghanistan places Iran in a vice of American power on its southern and northwestern borders, one which it is not likely to easily ignore. Finally, Russia is seeing a massive US military buildup on its western frontiers in countries like Poland and the Baltic Republics. American military presence in Afghanistan, bordering as it is on the volatile ex-Soviet Central Asian republics of Uzbekistan and Tajikistan, allows the US to have significant influence in these resource-rich strategically important newly independent countries, crowding out Russian influence and allowing for better containment of the resurging and newly confident Russian Federation.

When George Washington warned the first independent generation of Americans against foreign entanglements, both trade and military, America was a nation comprised of amazingly hardworking and independent people who could not conceive of working forty hours a week or having two weeks of paid vacation. Paid by whom? They would ask in wonderment. When sick, they could either pay the doctor or went without. Leisure? This was not a concept they would have had any understanding of. Today’s Americans, whether Democrats or Republicans, whether Trump supporters or Trump haters, whether rich or what in America passes for “poor” enjoy a standard of living that is unheard of virtually anywhere in the world now or in the past. They expect their government to provide for them free of charge a slate of services emergency response, education, healthcare, security, etc. that would have been unimaginable to Washington’s contemporaries. It is the Libertarians and the “purist” Trump supporters’ such as Ann Coulter’s shameful little secret; they know full-well that this modern American lifestyle that they enjoy no less than anyone else and which they have no intention of giving up is only made possible by the American military industrial complex and the aggressive projection of American military power overseas. They know it, but they choose to lie and deceive for personal gain those who may be duped into believing that one can give up self-reliance and not pay the price of a big, aggressive, and militaristically adventurous government. 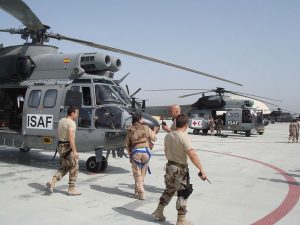 Let us all grow up and accept the simple truths that since war is inevitable it is much better to be on the winning side than on the losing one and that wars are better fought in faraway places than in one’s own back yard.