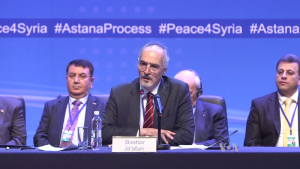 Kazakhstan declared the next Syrian conference to finalize peace details could be held in mid September of this year in Astana, the capital, said Foreign Minister Kairat Abdrakhmanov to reporters today.

“According to the information received from the Russian side, the ceasefire guarantor countries – Russia, Turkey and Iran – plan to hold a technical meeting at the expert level before the end of August to determine the agenda and exact dates for the next meeting as part of the Astana process to resolve the situation in Syria. The meeting could be tentatively held in mid-September,” he said, reported Russian state news agency TASS.

Russia, Iran, Turkey, the Syrian government, the Syrian armed opposition, and observers Jordan and the United States formed the basis of the earlier 5th conference in July.