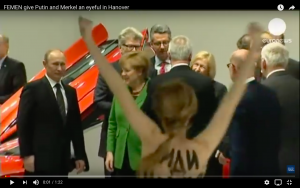 German Chancellor Angela Merkel declared today that sanctions against Russia by the European Union would be lifted once the Minsk ceasefire agreements were implemented and no sooner. She also commented that Moscow has to cease its actions against Ukraine and that the economic benefits would be good or both Russia and Germany.

“Ukraine does not have full sovereignty,” Merkel told reporters in Berlin, reported CNBC.

“I am working together with the French President and also with the help of the United States on finding solutions (for the Ukraine crisis) within the Normandy format.

“We just made clear in our joint statement released yesterday that the observance of the ceasefire agreement is of the utmost importance.

“If the Minsk agreement is kept, then the requirement will be met for lifting the sanctions on Russia,” Merkel insisted, noting that the move would be “good for the Russian economy as well as good for the German economy.”

Images: Russia Gets Female Pilots…I Mean Really, What’s Not To Like?