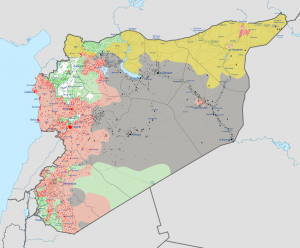 The ceasefire agreement in southern Syria reached by Moscow and Washington will not be revoked only because Israel’s fears, and it would be more reasonable for Israel to find a way “to live with this” instead of coming down on this agreement, a senior Russian parliamentarian wrote on his Facebook page on Monday, reported Russian state news agency TASS.

The main concern of the Jewish State regarding the Syrian Civil War has been the movement of Iranian-controlled militia into the Levant, increasing the threat to Israel. Israeli Prime Minister Benjamin Netanyahu stated through surrogates that he is absolutely opposed to the cease fire agreement negotiated between Russia and the United States as it allows Iran to expand its presence in the region.

“I can guarantee that the American side and we did the best we can to make sure that Israel’s security interests are fully taken into consideration,” said Russia Foreign Minister Sergei Lavrov.

“Israel’s motives are not concealed: it fears the strengthening of Iran’s position in the region, and also, it appears, limited possibilities for Tel Aviv itself to act against [Syrian President Bashar al-Assad]. However, nobody will be revoking such an important document that gives hopes for a breakthrough in the Syrian situation only because of Israel’s guesses about Iran’s hypothetic intentions,” said the chairman of the Federation Council’s committee for international affairs Konstantin Kosachev.

“That is why, it would be more reasonable for Tel Aviv not to come down on the already reached agreement between Russia and the US, but instead find ways how to live with this and reap benefits from victory over Islamic State (a terrorist group outlawed in Russia) which are clear for all countries of the region.”