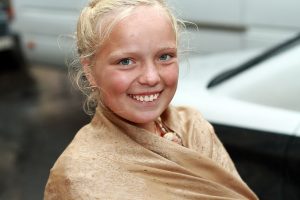 Russians are happier this year than during the last few years of the recession, according to a poll by the Russian Public Opinion Research Center, reports Russian state news agency TASS. Although fears of cuts in medical care, schools, and other social services have left their mark, it seems the stress caused by the recession are slowly receding.

“Russians’ current assessments of the situation in their personal lives and in the country, as well as expectations about the future significantly exceed those of mid-2015 and 2016,” reported the poll. The significant finding is that the happiness increase is significant, above 30 points difference in 2017 over the previous two years.

When asked about their opinions of the future, Russians were still very negative but again not as much as during the last two years.

“According to Stepan Lvov, head of the pollster’s research department, the first half of 2017 can be described as a period of “steady recovery from the tailspin ” that our society found itself in a year ago. “Many indeed thought back then that a streak of bad luck had begun. However, there are no assurances that this summer our citizens will be confident that a way out of a complex situation is guaranteed. The assessments of the current situation are so far not conducive to overcoming the fears of a recurrence in the crisis,” he noted,” reported TASS.