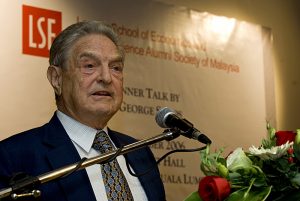 Hungary has fought back against the agenda of agitator George Soros and the ‘progressive’ agenda in the Eastern European country. Recently, Prime Minister Viktor Orban backed a media campaign stating Soros would ‘not get the last laugh.’ The EU has condemned the campaign signs as being ‘anti-Semitic’ as Soros is Jewish.

Soros has backed open borders, weak immigration, and a destruction of European culture by importing hundreds of thousands of migrants which will destroy the Continent’s heritage forever. Hungary has restricted foreign-funded NGO’s, and passed legislation clamping down on foreign-funded education, in addition to other actions against the Soros ‘Open Society’ campaign.

Orbán has not shied away from directly criticising the 86-year-old financier, who he describes as a “large-bodied predator” who is “spending endless amounts of money to support illegal immigration” and “ruining the lives of millions of Europeans,” wrote Breitbart.

“[W]e have deliberately never spoken of Soros’s Jewish heritage – specifically because it has nothing to do with the criticism of what he is doing,” insisted Dr Kovács.

He also accused Soros of “destabilising governments in the Balkans, supporting enemies of Israel, and sending to Europe hundreds of thousands of unchecked migrants from the Middle East and Africa, some of which are home to terrorist organisations that have publicly declared their hostile intent towards Europe and exploited the continent’s weak border security to move people and material.”

The Hi-Tech Traditionalist: The Church Of Climate Change

Israeli President Benjamin Netanyahu, an Israeli nationalist himself, had this to say about the anti-semitic claims, “Israel deplores any expression of anti-Semitism in any country and stands with Jewish communities everywhere in confronting this hatred.

“This was the sole purpose of the statement issued by Israel’s ambassador to Hungary. In no way was the statement meant to delegitimize criticism of George Soros, who continuously undermines Israel’s democratically elected governments by funding organisations that defame the Jewish state and seek to deny it the right to defend itself.”

Azerbaijan Unable Or Unwilling To Pay For Russian Weapons